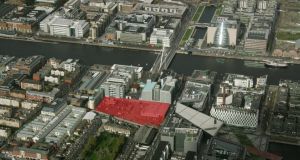 The 2.3-acre An Post sorting office at Cardiff Lane in the south Dublin docks area.

Road on the opposite side of the quays in East Wall.

The board of An Post has accepted an offer from property developer New Generation Homes to buy the Cardiff Lane facility and replace it with a state-of-the-art mails delivery centre on the north side of the quays.

The deal has been valued at over €40 million by Des Lennon of agents JLL who says the postal service will receive both cash and a new custom-built mail delivery services unit. The precise cash payment has not been disclosed but New Generation is known to have paid €1.9m for the 1.75-acre site at East Wall Road marketed by Ian Lyons of Allsop. New Generation will have to meet the expense of providing a new mail building extending to 1,858sq m (20,000sq ft).The facility is due to be handed over by the spring of 2017.

There should be no undue delay in securing planning permission for the East Road development – the entire docks are now deemed a strategic development zone under the planning regulations for the purposes of speeding up the rejuvenation of both the south and north docklands.

New Generation has been steadily buying up mainly housing sites in the greater Dublin area since it was founded in 2011 by brothers Greg and Hugh Kavanagh, and CEO Patrick Crean. The news that they have acquired the Cardiff Lane site will come as a surprise to the main commercial developers who are only too well aware of the pent-up demand for new office space in the docks.

New Generation Homes is financially backed by M&G Investments, an international asset manager which manages over €340 billion in assets for clients across Europe and Asia.

The postal site has mixed-use zoning which will allow for the development of about 9,290sq m (100,000sq ft) of offices and at least 80 apartments.

The site is directly opposite no 2 Grand Canal Square, the Daniel Liberskind-designed block occupied by the William Fry law firm. It is also adjacent to Facebook’s impressive European headquarters and the Bord Gáis Energy Theatre.

Closeby, Lisney is seeking in excess of €30 million for the 1.78-acre former British and Irish Steam Packet Company offices fronting on to Sir John Rogerson Quay.

This will be the second time An Post has availed of the high values in the docklands to move shop. In the 1990s, it abandoned its sorting office at Sheriff Street to allow developer Brian Rhatigan to extend the International Financial Services Centre.