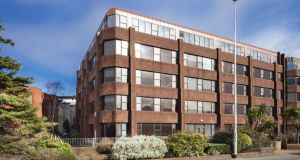 With the Dublin office investment market once again running strongly, a private investor is planning to offload Canada Life House at Blackrock, south county Dublin for a figure around €8.5 million.

At that price the investment will show an initial return of 9.27 per cent, according to selling agent Knight Frank.

The landmark block is occupied by Canada Life Assurance on a 30-year lease that began in 1991 and runs until January, 2021, giving a purchaser a secure income for seven years. The current rent is €823,000 per annum.

Great Wesco is one of the world’s leading life assurance companies with five wholly owned subsidiaries in the US, Canada, Europe and Asia.

Canada Life House is one of two distinctive office blocks in Blackrock village with profiles on to both Frascati Road and Temple Road. The location is noted for a number of national and international corporate occupiers such as Zurich, Permanent TSB and Lionbridge all close by.

The appeal of the area is strengthened by the operations of the Frascati and Blackrock shopping centres.

The various floors have an open-plan layout with a centralised core and a fire escape along the eastern elevation.

The third floor includes a data centre that benefits both from a suspended metal ceiling and raised floors to accommodate the bespoke HVAC system which keeps work spaces comfortable and energy efficient.

There is a combination of gas-fired central heating and individual ceiling-mounted AC cassette units.

The block is serviced by two 10-person lifts that were replaced in 2012.