€5.5m for hotel and apartments 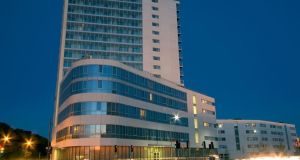 
Another profitable Dublin hotel goes on the market today at a fraction of its development costs.

Tom Barrett of Savills is quoting in the region of €2.5 million for the Metro Hotel at Santry Cross in Ballymun, Dublin 9, and another €3 million for 30 two-bed apartments on the upper floors. The landmark 15-storey hotel and apartment block is to be sold in either one or three lots at the direction of David Hughes and Luke Charleton of EY, who were appointed receivers by Bank of Scotland Ireland.

The project was developed eight years ago by Pierse Contracting and a group of investors who included businessman Paddy Kelly.

The three-star hotel originally traded as Days Inn and has been consistently profitable over the years with turnover generally running close to €2 million.

The strong bookings for the 88 hotel bedrooms, including 16 suites, stems in part from its close proximity to the M1 and M50 motorways, Dublin Airport and Dublin City University which has 11,000 students.

It is also located a short distance from the mega trader Ikea and a number of busy business parks.

Good mix
The hotel has a good mixture of facilities including bar and restaurant as well as conference rooms.

The Dublin hotel sector was one of the strongest performers in Europe in 2013 when, according to the ESRI, average room rates in the city rose by 7.4 per cent in the final three months of 2013.

The 30 apartments located on the top 10 floors of the block have been consistently popular with a professional clientele and are producing an overall rental income of €384,000 from mainly short term tenancies.

Many of the tenants enjoy the benefits of having hotel facilities in the same block and the use of the 160-space car park.