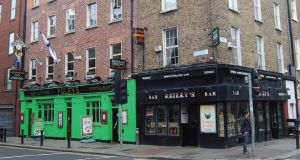 Foley’s licensed premises at the corner of Merrion Row and Merrion Street, Dublin 2, has been sold by receiver David O’Connor of BDO for €3.3 million – one of the highest prices for a city bar in four years.

O’Connor was appointed in October, 2012, and removed in March, 2013, when Foley challenged it in the High Court. An examinership later failed and O’Connor was reappointed in July,2013. He ran the bar since then and finally sold the business to Ciaran Marron and Shaun McEnaney of the Fiddler’s Elbow bar in Carrickmacross, Co Monaghan.

1 What is Covid Tracker Ireland? The HSE’s new app explained
2 British holiday home rental company exits Irish market
3 Ireland’s economy forecast to shrink 8.5% due to Covid-19 pandemic
4 Will family’s tax debt stop me getting my inheritance?
5 Why gift a son now if it eats into his tax-free inheritance threshold?
6 How to save money while helping to save the planet
7 TikTok to quit Hong Kong mobile market ‘within days’
8 Poverty could afflict more than one-in-five children in State by year end
9 Can we finally say farewell to the scourge of hot-desking?
10 Central Bank governor to call for ‘credible’ path’ to cut State debt post-Covid-19
Real news has value SUBSCRIBE