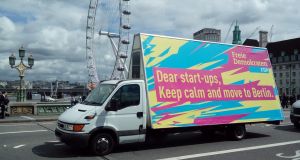 You can decide for yourselves if there was a hint of schadenfreude in the message, paid for by Germany’s liberal Free Democratic Party, but it was certainly the cheekiest example of the concerted effort made by other European cities to capitalise on the UK electorate’s decision to leave the EU.

Industry leaders in Amsterdam, Paris and, of course, Dublin, have also been making overtures to London-based technologists in a bid to claim some of the start-up momentum now that the UK has been thrown in to a period of self-inflicted uncertainty.

Only time will tell if the efforts of rival European capitals to attract some of the start-ups that would otherwise have naturally gravitated to London will be successful on any meaningful scale, but there are some important aspects to consider. Above all, it is important to appreciate what goes into making a technology start-up ecosystem.

On a recent visit to San Francisco, I discussed Silicon Valley’s unique qualities with a number of entrepreneurs and investors. It is one of the great clichés of the technology sector that politicians and business leaders in other parts of the world look to Silicon Valley in an effort to understand the ingredients of its success, seeking ways to replicate it in their own countries.

But in discussing what makes the place such an incredible hotbed of innovation, it’s clear that the usual ingredients – access to talent, access to capital, a culture of risk-taking and the cross-pollination of ideas – are only a part of the story. Any ecosystem is more than the sum of its parts, which grow interdependently and organically.

It occurred to me that visiting dignitaries asking how they can replicate Silicon Valley might as well be going to Brazil and asking how they can grow the Amazon rainforest back home. The Amazon and the Valley are unique ecosystems that grew over long periods of time, a result of specific conditions, serendipity, network effects, and above all without any central planning or planting involved.

The environment had to be just right, and the conditions just so, to allow the delicate interplay of different actors to flourish, be they plants, mammals, and insects, or tech giants, venture capital firms and start-ups.

In this analogy, the success of Ireland in attracting US technology companies to set up here can be roughly equated to building an enclosed tropical arboretum – create a dedicated environment, import some flora and fauna, and keep everything watered and humid. It’s not the real thing, by any means, but it gives a good impression of what a tropical rainforest feels like. The downside is the limited scope for growing indigenous plants, but that’s what the rest of the botanical garden is for.

It is useful to see London’s development as a start-up hub in a similar light. London is not Silicon Valley, of course, but the cluster of start-ups there didn’t happen for arbitrary reasons. The scene has a pronounced financial tech focus, and is in many ways an offshoot of the City of London; in some senses, the fintech explosion is an inevitable result of the city’s role as a global financial centre.

Needless to say, the city established itself as Europe’s financial capital over many decades and for many reasons, with the proverbial light-touch regulation being a big one. The network effects of having so many financial professionals in one place, combined with access to so much capital, gave London a big advantage over other European rivals in the fintech space. New York-based financial firms are naturally well-disposed to the place, with English in common and only five hours in time difference.

What worries London’s tech scene are the ingredients most at risk from Brexit. The EU’s freedom of movement make attracting talent easy and bureaucracy-free; indeed, one in five UK technology founders are foreign. In addition, “passporting” privileges allowed London-based firms to provide services across the EU while enjoying that famously feathery regulatory environment. Ironically, the UK was a key player in pushing for the introduction of the Digital Single Market.

While not exactly Amazonian in complexity, that is the sort of ecosystem environment that will be difficult for other cities to quickly replicate as the Brexit process changes the landscape.

Cases can be made for lots of rival cities which have some but not all of those advantages. Dublin is relatively well-poised to derive some benefit, even as it suffers from Brexit-related headwinds. Paris and Frankfurt are already established as financial centres, if not as light-touch as London. Berlin is very attractive to young talent as it fosters a start-up scene that feels almost as artistic as technological.

Perhaps London’s advantages are so great that its start-up scene will weather this period of uncertainty. The concern for London’s technology leaders, however, is that Brexit will be akin to an environmental shock that pollutes the ecosystem beyond repair.

Almost 600 social and affordable houses given green light in Dublin

1 Majority of employees don’t want to return to pre-Covid working patterns
2 The $6bn judgment pitting Nigeria against Irish businessmen
3 Almost 600 social and affordable houses given green light in Dublin
4 Homeworking is depriving me of juicy gossip
5 If tourists are such pariahs should we not be testing them on arrival?
6 ‘My rent here is so low it’s a joke’
7 Tobacco giant’s menthol-ban substitutes take 5% share of Irish market
8 State to auction €750m worth of Irish treasury bills
9 Investors in Irish solar energy fund in line for €20m payout
10 European shares rally as attention turns to EU recovery fund
Real news has value SUBSCRIBE