Can Enterprise Ireland break its own record? 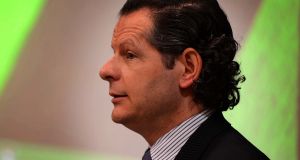 John Moran, a former head of the Department of Finance, will address the Institute for Securities & Investment on what the new European landscape looks like for Ireland. Photograph: David Sleator

What do the European elections mean?

It is a different Europe today and what has emerged over the weekend will be picked apart by business and political commentators throughout the continent.

In one of many such postmortems here, former secretary general of the Department of Finance John Moran will examine the new landscape at a Chartered Institute for Securities & Investment event. Given his background – Mr Moran is also a founder of RHH International and a board member of the European Investment Bank – his views will be of some considerable interest.

According to the Chartered Institute for Securities & Investment (CISI) , he will focus on “how Ireland may fare in a Union where extremes may hold greater sway, populism is a renewed force, and where potentially the UK is absent”. Ahead of the event, the degree to which those potentials have played out was of course unknown. It has the sound of a film pitch although many are already exhausted by the drama.

Mr Moran will place the European results against the backdrop of the local elections and what particular relevance they might have to spending priorities for the Government. He will also look at how Ireland might position itself as a small country in the new political groupings.

It “will be a timely and insightful take from an experienced and informed speaker on the realpolitik of the new Europe,” noted Frank O’Riordan, CISI president.

In a modern economic world where debate is fixed on trade deals and exports, can Enterprise Ireland break its own record set last year? We will find out on Thursday when the agency responsible for helping Irish companies access foreign markets releases its results for 2018.

“Set against the continuing backdrop and uncertainty of Brexit...(it) will include insight into the markets and sectors that have performed best in the last year,” the agency said ahead of the results, due to be launched by Minister for Business, Enterprise and Innovation Heather Humphreys.

2017 set a high bar in terms of market diversification – a key counter-Brexit tactic – which saw a record €22.71 billion worth of products sent overseas. It marked a 7 per cent increase on 2016.

At the time of those results, Enterprise Ireland chief executive Julie Sinnamon noted growth in the UK market was achieved despite the obvious concerns.

“Clients are taking the necessary actions to offset the impact and manage the risks posed by Brexit,” she said.

Events this week and in the coming weeks give renewed impetus to such weighty considerations.

1 How much state pension will I get next year?
2 Oxford Covid vaccine trials offer hope for elderly
3 Ulster Bank to introduce new card payment controls on app
4 How long can Government afford to keep State pension age at 66?
5 Investors unnerved by Brexit, Covid-19 and US election jitters
6 Covid-19 will worsen shortage of accountants, says CPA Ireland
7 Death of Samsung chairman sparks hopes for shake-up
8 Sustainable investment: How your pension can help tackle climate change
9 Irish start-up Wayflyer raises €7.8m in seed funding
10 The baroness with grande distribution in her blood
Real news has value SUBSCRIBE