Also in the news: Budget 2017, Samsung, Lidl, and Project Eagle 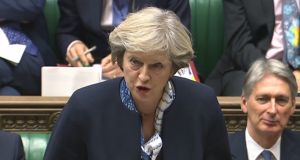 British prime minister Theresa May: mixed messages in relation to whether Britain will undergo a hard or a soft Brexit. Photograph: AFP/Getty Images

While Budget 2017 dominated talk on the streets of the Republic this week, a storm that threatens to morph into a typhoon was brewing across the water.

After a period of relative calm in relation to Britain’s vote to leave the European Union, the headlines bemoaning sterling’s worst performance in however many years just kept coming.

The currency is in the throes of its biggest ever crisis with traders deserting it in great numbers as confusion and uncertainty emanates from Westminster and Downing Street in relation to how this inevitably messy divorce will play out.

The pound slumped to its lowest on record at one stage, stretching beyond the introduction of free-floating exchange rates in the 1970s and all the way back to the mid-1800s, according to data compiled by the Bank of England.

Its effective exchange rate, which is weighted to reflect the UK’s trade flows, hit a low on Tuesday – weaker than the depths hit during the financial crisis, Britain’s ejection from the European Rate Mechanism in 1992 and its decision to leave the gold standard in the 1930s.

It was suggested that much of the currency’s woes are due to mixed messages from prime minister Theresa May in relation to whether Britain will undergo a hard or a soft Brexit. The main difference between a hard and soft exit is whether the UK will have access to the EU’s single market.

Sterling rallied somewhat on Wednesday when May agreed to give the UK parliament a debate on the plans for Brexit, but it was a short-lived respite as the currency traded at 90.5p against the euro on Thursday evening.

European Council president Donald Tusk had little sympathy for Britain when he outlined in no uncertain terms that it will have to choose between a hard Brexit and not leaving the EU at all.

Tusk told the European Policy Centre in Brussels that it was “fanciful” to believe Britain could retain the advantages of EU membership while escaping its obligations, such as the free movement of people.

The markets are unlikely to be reassured by secretary of state for exiting the European Union David Davis when he said the UK would not be in a position to give details of what it wanted from negotiations with the EU beyond its “overarching aims”.

The overarching aims, he said, include “bringing back control of laws to parliament, bringing back control over decisions of immigration to the UK, maintaining the strong security co-operation that we have with the EU and establishing the freest possible market in goods and services with the European Union and the rest of the world”.

If all that wasn’t bad enough, a Financial Times analysis found that the UK’s divorce bill could be up to €20 billion. The sheer size of the upper estimate, which some EU officials reckon is too low, threatens to poison the break-up and derail a Brexit transition and trade deal, according to several senior European figures involved in the process.

On this side of the Irish Sea, Central Bank governor Philip Lane has warned of further volatility in financial and currency markets as Brexit negotiations progress. He also said harder versions of Brexit were likely to result in more substantial reassessments of growth prospects and asset prices here and elsewhere.

It’s not all doom and gloom though. Fears of a hard Brexit have led to a spike in the number of UK people seeking jobs in the Republic. In the 100 days since the June referendum, UK searches for jobs in the Republic on Indeed. com, the world’s largest recruitment site, have risen by 20 per cent.

Minister of State at the Department of Finance Eoghan Murphy defended the Government’s efforts to attract companies to Ireland post-Brexit amid reports that Germany is leading the way in luring London-based finance activity to Frankfurt and other German cities.

Speaking on the fringes of a meeting of euro-zone finance ministers in Luxembourg, the Minister of State said he expected at least two announcements by the end of this year from companies intending to expand in Ireland, with further announcements in the pipeline for next year.

For his part, Minister for Finance Michael Noonan unveiled a series of measures to cushion the Irish economy from the likely impact of Brexit, including the setting of more stringent debt-reduction targets and the establishment of a rainy day fund.

Of course, the other big story this week was Budget 2017. In what was perhaps a sign that an election may not be too far down the tracks, Noonan and Minister for Public Expenditure and Reform Paschal Donohoe delivered a larger than previously flagged package, with the measures to cost the exchequer an extra €1.3 billion.

The chairman of the Irish Fiscal Advisory Council, whose remit it is to provide the Government will independent budgetary advice, was however unimpressed. Prof John McHale said the Government had gone beyond what was prudent and that it was set to breach key EU rules.

Nonetheless, self-employed taxpayers were among the main winners, with a combination of an increased tax credit and cuts in universal social charge rates delivering gains to many of about 2 per cent in take-home pay. There was also a €5 a week increase in the pension and other welfare payments.

There were no measures this year to claw back any gains from higher earners. The only tax increase in the budget was a 50 cent hike in the cost of a packet of cigarettes. Earlier plans to increase the tax on diesel were abandoned.

The only other revenue raiser was a promised crackdown on tax evasion and a limited €50 million extra from vulture funds from the closure of a tax loophole.

Elsewhere, the other major tax concession was directed at first-time housebuyers, with a tax refund of up to €20,000 on those buying newly-built homes valued at up to €600,000. Young families will also gain from a new childcare package which will kick in from next September.

The Project Eagle controversy rumbled on with revelations that may lead to National Asset Management Agency chairman Frank Daly facing further questions in front of the Public Accounts Committee.

A former member of Nama’s Northern Ireland Advisory Committee (NIAC), Brian Rowntree, said it had discussed a report into the North’s property market that he regarded as commercially sensitive and confidential. That statement contradicts previous evidence by Mr Daly that NIAC members received no confidential information on the agency’s assets.

It also emerged Nama had blocked potential bidders for its Northern Ireland loans from hiring local agencies to value the properties against which the debts were secured ahead of their controversial sale to US company Cerberus.

In tech news, Samsung Electronics slashed its quarterly profit estimate by a third on Wednesday, soaking up a $2.3 billion hit from ditching its flagship smartphone in what could be one of the costliest product-safety failures in tech history.

Quantifying the financial pain of Tuesday’s move to scrap the Galaxy Note 7 smartphone after a global recall and weeks of mounting problems, the world’s top smartphone maker said it expects its July-September operating profit was 5.2 trillion won (€4.2 billion), down from the 7.8 trillion won it previously estimated.

Finally, in retail, Lidl announced plans to expand its footprint in south county Dublin with plans to open a “state of the art” new store in the largely vacant Shankill Shopping Centre.

The shopping giant declined to disclose the price it paid, but the centre was recently valued by its owners at more than €8.7 million. Bilaro, a company linked to Lithuanian retail magnate Nerijus Numavicius that sold the site, paid about €6 million for it in 2012 and extensively remodelled the centre before selling it.