Also in the news were exchequer returns, housing, Clerys and employment figures 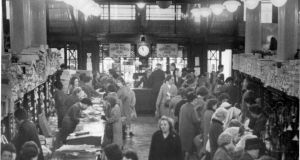 Clerys in 1965: it closed in 2015 and was bought by a company that uses a tax-avoidance vehicle. Photograph: Dermot Barry

“Probably not,” was the Central Bank chief economist’s answer to his own rhetorical question as to whether the economy, growing at 4 per cent, needs a shot in the arm in next week’s budget.

Gabriel Fagan was speaking to reporters at the unveiling of the bank’s latest quarterly bulletin, in which he questioned the need for additional stimulus in a strongly growing economy in which unemployment is falling.

With the Government preparing to unveil a €1 billion plus bag of goodies, Mr Fagan said it was “very hard to argue the case” that the economy needs stimulus, but did praise the Government for at least staying within the EU’s fiscal rules.

We won’t have to wait much longer to find out who is going to benefit most from Budget 2017, but Minister for Social Protection Leo Varadkar was out this week to say the benefits cannot be confined to pensioners. He said there were other groups to be looked after, including widows, those on blind pension, carers and the disabled.

One thing the budget will have to do is try to introduce “Brexit-proof” measures after Britain’s vote to leave the EU suddenly became very real when British prime minister Theresa May confirmed a March deadline to set the process in motion.

Business groups have been out in recent weeks mooting ideas and proposals to make sure their interests are protected, but many were rejected because they risked breaching State aid rules.

Most vulnerable are exporters due to the drop in the valuation of sterling, with the currency falling to new lows. Taoiseach Enda Kenny reassured us the budget will include a number of measures to safeguard Irish companies and exporters, but things got much worse 24 hours later with an overnight “flash crash”. Sterling plunged to more than 94p before recovering to 89.3p by the time exporters were sitting down to their cornflakes on Friday. “In a word ‘frightening’,” one analyst said.

To combat such alarming trends, the Government is likely to ramp up SME lending from the State-owned Strategic Banking Corporation of Ireland (SBCI) and to develop specific programmes to support export sales to new markets.

There were also reassuring words from the Central Bank, which said the economy is better equipped to deal with a slump in sterling than it has been in the past. Just as well, says you.

The Brexit kerfuffle did, however, contribute to a downgrading of the economy’s growth projections by the Department of Finance. It is now predicted to grow by 4.2 per cent in gross domestic product (GDP) terms this year, down from the 4.9 per cent forecast in the department’s Summer Economic Statement. The department also downgraded its GDP forecast for next year from 3.9 per cent to 3.5 per cent.

That being said, the State’s finances remain on a steady footing. The latest exchequer returns for September show tax receipts are €484 million above profile. The figures show the Government collected €33.4 billion for the nine-month period, which was up 5.7 per cent on the same period last year.

The over-performance of corporation tax, however, offset those figures, and was the strongest performing tax head. The State took in €4.16 billion from corporations, some €644 million or (18.3 per cent) ahead of projections.

SPVs, which are designed to pay little or no tax on their activities, contributed “very little” to the Republic’s GDP, it said. Some 822 SPVs held €324 billion of assets at the end of last year, but less than €152 billion qualified as shadow banking assets.

The figures on jobs were also good, as the Live Register fell below 300,000 for the first time since the end of 2008. The latest statistics showed 286,490 people signed on – the lowest level in eight years – representing a year-on-year decline of almost 14 per cent.

There are still massive problems in the State’s housing sector though, with two reports this week suggesting that asking prices nationally have risen, so far this year, at an annual rate of more than 7 per cent.

MyHome.ie, which is owned by The Irish Times, and Daft.ie both painted a picture of a sector under strain due to a lack of supply and a pressing need for the Government to stimulate home building.

Separately, the Central Bank published research which suggests it will take a couple living in a two-bedroom apartment in Dublin up to four years to save a deposit to buy a three-bed home. Those living in Connacht, on the other hand, can save enough for their first home in just seven months.

The Central Bank’s mortgage-lending rules, as well as rent and sales price increases, means it is taking up to two years more for Dublin residents to save a deposit for their first home than it did in 2014.

The Government finally bowed to pressure this week and agreed to establish a commission of investigation into the sale of Project Eagle by the National Asset Management Agency.

A recent report by the Comptroller and Auditor General found Nama may have cost the taxpayer €220 million when it sold the portfolio of about 900 properties, mainly in Northern Ireland, to US firm Cerberus for £1.3 billion.

Taoiseach Enda Kenny met party leaders and told them the inquiry would be complete by the end of 2017 and would be headed by a serving or retired judge. It was agreed a statutory commission of investigation would be established.

Meanwhile, Minister for Finance Michael Noonan, having initially declined an invitation, was before the Oireachtas Public Accounts Committee to answer questions on the subject.

He told the committee he knew that former Nama adviser Frank Cushnahan was advising one of the US companies bidding for agency’s Northern Ireland loans in March 2014, which was the reason why US investor Pimco dropped out of the race to buy the loans.

The controversial closure of iconic retailer Clerys hit the headlines again this week when it emerged Gordon Brothers, the Boston private equity firm that sold Clerys hours before it was liquidated last summer, was paid €3.65 million from the store’s coffers in the run-up to the sale.

The largely unexplained payment, which is referred to only as “interest and fees” in the company documents covering the period of the €29 million sale, was almost six times larger than a corresponding payment the previous year.

Clerys closed in June 2015, with the loss of more than 450 direct-employee and concession-holder jobs.

Financial statements recently filed for several companies connected with Clerys reveal that 80 per cent of Natrium, the company that bought Clerys on the eve of the store’s closure, is vested in an Icav (Irish collective asset vehicle).

Icavs are a complex type of tax-avoidance vehicle, which are expected to be subject to a loophole closure in the budget. They were introduced last year to tempt certain types of offshore fund business to Ireland, but it has since emerged they have been widely used to avoid tax on Irish property.

Natrium is 20 per cent owned by a company connected to developer Deirdre Foley. The other 80 per cent is owned by Private Equity Real Estate Icav – the tax avoidance vehicle – which is connected to Cheyne Capital, the London hedge fund that is the majority owner of Clerys.

1 Basic income for all: Has the Covid crisis given us a new economic model?
2 ‘I don’t need to do any of this. . .I don’t actually need to work.’
3 Promontoria barred from pursuing doctor over Ulster Bank loan
4 Only way is up for Stripe as valuation skyrockets
5 Direct sea routes to Europe offer certainty in choppy Brexit waters
6 Admission of mistake in Oxford vaccine dose raises doubts over reliability
7 Brexit stumbling blocks persist as Barnier travels to London
8 Online shoppers face unwelcome tax surprise
9 Kinzen raises $2.2m as it helps clients fight ‘misinformation’
10 AIB revives €1bn-plus problem mortgages sale
Real news has value SUBSCRIBE