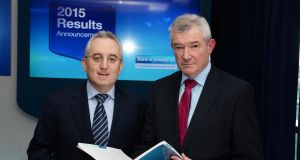 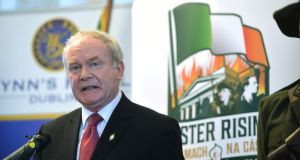 Martin McGuinness: the impact of a Brexit would be “absolutely enormous” on the North. Photograph: Alan Betson / The Irish Times 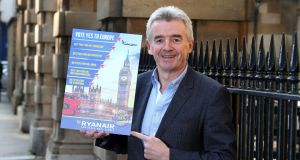 nBritish prime minister David Cameron has been playing relationship counsellor with Britain and the European Union. Having thrashed out the terms on which one side is willing to move forward, he must now bring his case to the other disgruntled party.

The deal on the terms of Britain’s future membership of the EU includes a raft of special measures to placate its wandering eye. As to whether they try to make it work or go their separate ways, Cameron announced it will be decided by referendum on June 23rd. The possible implications of a messy break-up have gained traction since the deal was struck and the date was set.

There was a blow for Cameron almost immediately as London mayor Boris Johnson said “after a great deal of heartache” he would be campaigning for a Brexit. He said Cameron had failed to deliver fundamental change in the relationship with Brussels.

The next day, sterling hit a seven-year low and rating agencies Moody’s and Fitch warned that exiting the EU could have implications for Britain’s credit ratings. This will now be a major issue for currency and financial markets in the run up to the referendum.

Already business bosses are speaking out, including some on this side of the Irish Sea. Bank of Ireland boss Richie Boucher said he was not worried about the impact on the bank’s UK units, but Ryanair chief Michael O’Leary said it was “absolutely clear” the UK economy and its future growth prospects are stronger as a member of the EU. O’Leary said he would “plaster his planes” with anti-Brexit messages.

There has been no such clarity among the political parties in Northern Ireland with unionists and nationalists taking up different sides of the debate. First Minister Arlene Foster said the DUP had “always been Eurosceptic” and would be campaigning to leave the EU, while Deputy First Minister Martin McGuinness said the impact of a Brexit would be “absolutely enormous” on the North.

There was no such division among representatives from the Federation of Small Businesses (FSB) who told the Northern Ireland Affairs Committee that a British exit would create uncertainty and potential risks for small businesses.

The euro has also been dealing with the uncertainty, and has been held back on worries that the euro zone itself could face a period of instability if Britain chooses to leave, as well as by fears of slow euro zone growth.

nIt’s a far cry from 2008 for Bank of Ireland which published results this week that indicate it has moved from a crisis-management situation to a normal bank again.

Its share price rebounded by 5.3 per cent in Dublin after it recorded an underlying pre-tax profit of €1.2 billion last year, and it emerged new lending rose by 40 per cent to €14.2 billion, while non-performing loans were reduced by €3.8 billion. All of that meant

The bank’s chief executive Richie Boucher said they were “trying to be prudent” but it was such a successful year that he no longer felt compelled to waive €118,000 of salary and pension accruals, meaning he brought home a tidy €961,000 last year.

It wasn’t all good news for the bank though as it emerged the deficit in its defined benefit pension scheme widened by €250 million in January due to volatility in the global stock markets. That’s on top of the €740 million deficit at the end of December. nIrish companies produced a string of impressive results as the reporting season got into full swing, many benefiting strongly fro

m the strength of the US dollar as they translated earnings back into euro.

Food group Kerry saw revenue grow to a record €6.1 billion last year after spending more than €900 million on acquisitions in an effort to reposition the business to exploit emerging trends in the sector. Glanbia, like Kerry now an international player in its field, also did well, reporting a 9 per cent rise in earnings to €310 million in constant currency terms. Unadjusted earnings rose by 27 per cent, boosted by dollar strength against the euro. Both companies did well despite difficult conditions in dairy markets.

Insulation specialist Kingspan is preparing to spend up to €500 million on buying rivals to expand its business. Sales at the Cavan-based company rose 47 per cent to €2.8 billion from €1.9 billion in 2014.

nIn another indicator of a return of the good times, Ireland is about to have its very own Orient Express, or at least some variation of the luxury international train service.

Mivan, the Antrim construction company, won a £2.5 million (€3.2m) contract to fit out a new luxury sleeper train that the parent company of the Venice Simplon-Orient-Express plans to launch in Ireland this August.

The Belmond hotel company and luxury travel operator will unveil the Belmond Grand Hibernian in August offering two, four, and six-night journeys, for up to 40 passengers, from Dublin throughout Ireland. It is estimated that it will take a team of 40 craftspeople from Mivan to get the train ready to meet Belmond’s “exacting standards”.

nWith the votes being counted in yesterday’s general election, there was a late boost for the flagging Government parties when official figures were released showing employment at its highest level in seven years, even though there was some slowdown in the rate of growth. Total employment rose 44,000 in the year to the fourth quarter of 2015.

”. The company’s large unit in Ireland – which serves as its headquarters for Europe, the Middle East and Africa – bears the bulk of the tax liability on Google’s profits from sales in Britain and other big European markets.