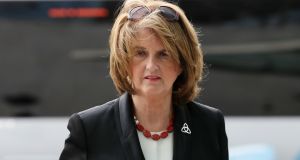 Joan Burton TD said Minister for Finance Paschal Donohoe repeatedly referred to the budget being a Brexit budget, but he “decided to leave the most vulnerable people out of the Brexit considerations”. File photograph: Collins Courts

The Government has shown an “unbelievable error of judgment” by excluding from a no-deal budget those most vulnerable to a hard Brexit, Labour finance spokeswoman Joan Burton has claimed.

Ms Burton said Minister for Finance Paschal Donohoe repeatedly referred to the budget being a Brexit budget, but he “decided to leave the most vulnerable people out of the Brexit considerations”.

The Dublin West TD said there would be frustration and disappointment in thousands of homes because there is “absolutely nothing for them”.

The ESRI predicted the cost to each household in the event of no deal as between €892 and €1,360.

Without Brexit a 1.5 per cent inflation rate is predicted for next year, but factoring in a messy departure from the EU by the UK, food prices will rise and “will hit people on the lowest incomes, those on very low pay”, those relying on social welfare and the retired, she continued.

Ms Burton noted there were a couple of concessions, with a €5 increase in the living alone allowance, €3 a week extra for families with children over 12 and €2 for children under 12.

She added that by the end of the year the minimum wage was meant to pass the €10-an-hour threshold, but this was expected to be parked pending the outcome of Brexit, leaving low-paid workers vulnerable.

Labour health spokesman Alan Kelly said Budget 2020 “is a sham budget for health that will do absolutely nothing to deal with the year-round winter conditions in our hospitals”, along with the 100 unfilled nursing posts in University Hospital Limerick, the hospital with the highest trolley count.

“An extra €25 million for National Treatment Purchase Fund means that €100 million will be spent buying private healthcare next year while no real measures are brought in to tackle the crippling waiting lists,” he said.

Solidarity TD Mick Bailey said there were no conditions being put on the bailout that many large firms would get for Brexit, while “the only mention of workers in the Minister’s speech is provision for social protection payments for workers being laid off”.

He warned that carbon tax would only have a minimal impact on climate change and would increase fuel poverty. He said the €2-a-week increase in the fuel allowance to mitigate the effect of the carbon tax rise was equivalent to half a bale of briquettes.

People Before Profit TD Richard Boyd Barrett said 720,000 people live in poverty, including 230,000 children, and it was a “big mistake” not to increase social welfare benefits.

He said Irish workers were now working effectively for less where the tax contribution had gone from €13 billion in 2007 to €21 billion now, and the Government was imposing a carbon tax increase on that.

Rise TD Paul Murphy claimed the Construction Industry Federation had written the budget for the Help to Buy scheme, which assists first time buyers. Dubbing it the “help to profit” scheme for developers, Mr Murphy said it kept prices up on new homes, would cost €100 million a year and passed through the hands of new homeowners to the back pockets of big builders.

Independents4Change TD Thomas Pringle criticised comments by Minister for Finance Paschal Donohoe that Ireland had a well-run economy. He asked how it could be deemed well-run when there were more than 10,000 people who were homeless.