Brexit ‘will not be a fatal blow to Irish economy’ 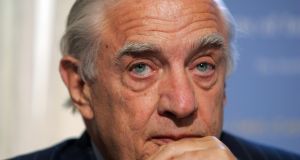 The following is an edited version of one of the last interviews Peter Sutherland gave prior to his death.

Attorney general, European commissioner, director general of the General Agreement on Tariffs and Trade (GATT), director general of the World Trade Organisation (WTO), chairmanships of BP and Goldman Sachs... Peter Sutherland undoubtedly enjoyed an illustrious career. In fact, he was described by one newspaper as possibly having the best CV on the planet.

Prior to embarking on an international career that straddled politics and business, the Gonzaga and UCD-educated barrister served on the board of a number of Irish businesses, becoming chairman of Allied Irish Bank and the first chairman of Shannon Aerospace, as well as joining the boards of CRH and Guinness Peat Aviation (GPA).

The Irish business landscape has changed substantially since the beginning of his career. “My recollections of those times are that they were a time of both extreme economic difficulty and transition of attitude from closed to open, in terms of our future,” recalls Mr Sutherland.

Peter Sutherland served as attorney general under Garret FitzGerald’s two governments during a period of straightened economic times in the early and mid-1980s. However, it appeared to him that a significant economic transition was under way. The import substitute economy and the protectionist attitude that Ireland had adopted following independence was rapidly losing favour.

Instead, the Irish economy was becoming increasingly plugged into the international trading system. Sutherland’s role within the European Commission (1985-89) was of huge relevance too. He was part of a triumvirate of commissioners who were responsible for the 1992 reforms, which included free movement of goods, persons, capital and services.

“I had learned through my experience in government that this was nationally extremely important,” Mr Sutherland says. On the request of Jack Delors, president of the European Commission, Mr Sutherland was asked to devise a method through which the 1992 Programme could be implemented. The result was the Sutherland Report.

“This has been transformative in the Irish economy ever since,” he adds. At this time, it became evident that there had to be a focus on attracting inward investment, since Ireland lacked the industrial skillset to establish its own industries.

He points to some pioneers – Smurfit, CRH and GPA – that were innovative. Combining these companies and a rapidly developing banking industry provided the basis for solid growth. But he was under no illusions – another leg to Ireland’s growth strategy was needed.

“We didn’t have enough of indigenous industry to present a future for our young people,” Mr Sutherland says. Creating employment and the generation of growth depended on attracting large volumes of foreign direct investment.

Given Ireland’s dependence on the United Kingdom, Europe was of exceptional importance in this context.

“Europe was at that time the crucial element in providing us with a future,” Mr Sutherland says. The old Anglo-Irish Trade Agreement generated opportunity but ultimately an over-dependence on the United Kingdom. Therefore Europe was perceived as the vehicle for industrial strategy as well as political advancement and engagement, he says.

Proclaiming that we are “good Europeans” is a position with which Mr Sutherland does not agree. While he questions the necessity for some of the nine referendums that were held on various EU treaties over the past four decades, he points to the fact that Ireland has on a number of occasions stopped Europe in its tracks.

“I believe we were unduly sensitive and have been on the issue of neutrality over a prolonged period of time,” he says.

Britain voted to leave the EU in 2016, posing huge challenges for Ireland. Sutherland says that a new trade deal between the EU and the UK must not disadvantage Irish products. The free movement of goods and people between Britain and Ireland must be maintained, he says.

“Paradoxically it could have the effect of stimulating further foreign direct investment into the Republic of Ireland,” he adds. Britain will be a huge loss to the EU because it has always been one of the members most committed to open borders and free trade. Even though Brexit will be bad for both Britain and the EU, “it will not be a fatal blow to the Irish economy”.

While he believes that the Irish economy is in a good position, following a catastrophic downturn, he errs on the side of caution. “I think that we must be careful not to get carried away, because there are dangers still out there,” Mr Sutherland says.

The euro zone still faces huge challenges, particularly high debt levels among periphery member states. Mr Sutherland feels this may lead to further traumas in the future. He also points to Ireland’s heavy debt burden. “This is going to mean a continued need to be very cautious and prudent,” he says.

Yet in terms of the outlook for foreign direct investment, the future for Ireland is bright because of a number of advantages: an English-speaking country, being in the EU unlike the United Kingdom after Brexit, access to a vast market, and a demographic profile that is positive in terms of youth and education.

“I think Ireland should have a positive view of its own future,” Mr Sutherland says. In relation to underpinning Ireland’s position as an open trading economy, he has a simple message: “Competitiveness will determine investment.”

It is important that this level of competitiveness is maintained, Sutherland says: “We’re in an open market, and we absolutely need an open market in Europe to provide employment, so it is in our own hands to remain competitive.”

There are opportunities for investment into Ireland that can be stimulated abroad. Sutherland draws on one example: the connection between Silicon Valley and technology companies in Ireland, a relationship that he believes has been immensely valuable. “Every company I’ve ever served on, we’ve had significant Irish input,” Mr Sutherland says.

The complete version of this interview is published in Ian Hyland’s book Ireland Inc: A History of Irish Business