Brexit vote count:What to watch for as the night unfolds

Want to follow the British Brexit referendum? Here’s everything you need to know to get through results night. 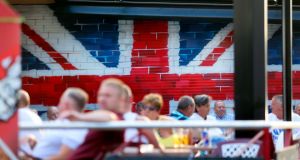 UK polling stations close at 10 pm on Thursday June 23rd as Britain decides whether to stay or remain in the European Union. Photograph: EPA

The UK is poised to decide on its future in the European Union in a referendum on June 23rd.

Once UK polling stations close at 10 pm on June 23rd, politicians, investors and the public will face an anxious couple of hours before the first results are announced.

Unlike in a general election, broadcasters won’t be releasing an exit poll — because there’s no way the pollsters can be sure they’re targeting an accurate cross-section of voters on the day. It’s possible they may have conducted other on-the-day surveys for publication after voting ends.

The ballot boxes will be transported to centers in 382 areas for local counts. First, officials will tally up the number of ballot papers in each box and check it matches records from the relevant polling station. Then they’ll announce the local turnout for each area. Only then will teams begin to sort and count the ballot papers. Each result will be announced locally: The official in charge will read it out in the counting center, often in front of television cameras.

It’s the total number of votes that counts; it doesn’t matter how many individual areas each side wins. And the timings below, based on a list compiled by the Press Association newswire, are only a very rough guide; the timetable often slips. If either side disputes the result in a particular area, the ballot papers may need to be recounted, and that can take time.

Chris Hanretty of the University of East Anglia has projected likely outcomes for most of the voting areas based on local levels of Euro-skepticism. Other academics have done similar work. “Anywhere with a high UK Independence Party vote, a large older population and a large non-graduate population is going to be relatively good for ‘Leave,”’ says John Curtice, the Strathclyde University professor who’ll be analyzing the results for the BBC on the night.

When might we have a good idea of the result? Possibly about 3:30 a.m., according to Hanretty. Sometime between 3 am and 5 am, Curtice estimates, depending on how close it is. If it’s really tight, “you might be waiting there horribly close to 8 o’clock in the morning,” he warns.

The first results are due — but they’re unlikely to provide much useful information about the overall outcome. The Isles of Scilly, off England’s southwest coast, and Gibraltar are due to be up first. The smallest count area, the Scillies are home to only 2,000 of the UK’s 65-million population. In Gibraltar, the British territory on the tip of southern Spain where 33,000 live, a poll in April found 88 per cent planning to vote “Remain.”

The real action starts. Sunderland and its northeast English rival, Newcastle, with a combined population approaching 600,000, will race to be the first major center to announce a result. With the national polls running neck-and-neck, we should expect “Leave” to be 6 per centage points ahead in Sunderland, according to Hanretty. But there’s a large margin of error: “Leave” is 90 per cent likely to be between 1 point behind and 13 points ahead. A closer result there would indicate “Remain” on course for a nationwide win. The model suggests “Remain” should be 12 points ahead in Newcastle. But beware — the cities are just a few miles apart and we’ll be unable to discern any national trend.

Expect the result from the City of London, Britain’s most pro-EU district, according to the Hanretty tally. But it’s also the second-smallest count area and totally unrepresentative of Britain as a whole. The result from Swindon in western England will add to our knowledge. Out of 188 districts ranked by polling company YouGov, it’s the 12th most Euro-skeptic.

Oldham is due to provide the first result from northwest England. The UK Independence Party has polled strongly there recently, so expect it to tend toward “Leave.”

The flow of results will start to speed up. “Leave” is projected to have a 20-point lead in Basildon, in Essex, and Hartlepool, in the northeast. Stockport in the northwest tends toward “Remain,” while nearby Salford looks like a swing area. Wales has seen a trend toward anti-EU sentiment recently, and the first district expected, the former mining area of Merthyr Tydfil, could go either way. We should also get the first indications from generally pro-EU Scotland, with the count completed in the Western Isles.

About 40 results are scheduled to be in by about now. The first London boroughs are due, with big “Remain” leads expected in Wandsworth and Westminster. Likely swing areas include Denbighshire and Wrexham, in North Wales, and Hart, in Hampshire.

Castle Point in Essex should produce one of the biggest leads for the “Leave” campaign; Lambeth, in south London, and Oxford may see even bigger advantages for “Remain.”

We’re scheduled to have reached 140 results by now — more than a third of the total. Thanet, where UKIP’s Nigel Farage tried to win a seat in Parliament last year, is among the “Leave” strongholds, while Islington, in north London, is one of the areas tipped for a high “Remain” vote. Chesterfield, in the East Midlands; Durham in the northeast, Wirral, on Merseyside; and Welwyn Hatfield and Epsom & Ewell, in the London commuter belt, look to be possible close results.

Lancaster in northwest England, bang on the median line on Hanretty’s scale of euro-skepticism, is due to announce its result. Pro-EU Edinburgh and Cambridge are also expected to report, along with Boston, in Lincolnshire, an area that has seen one of the most noticeable influxes of eastern European workers. We should have more than half the results by now.

The busiest time — nearly 100 counts are scheduled to be completed at this hour. They include the two single-biggest count areas — Northern Ireland and Birmingham, with a combined population of 2.9 million.

More big cities announce their results, and with the bulk already in, it may only be these very populous areas, which tend to be pro-EU, that can have much influence on the final outcome at this stage. Glasgow, Manchester and Liverpool have 1.5 million inhabitants between them. If we’re running to plan, there are only just over 30 results left after this.

Leeds and Bristol are the last two really big cities left to announce how people have voted though pro-Brexit rural Cornwall is also due now.

The last three scheduled results, from Arun on the south coast, Waveney on the east coast and Harborough in the East Midlands. They have a total population of only about 350,000, so the nationwide score will have to be extremely close for them to make a difference. If that’s the case it’s worth noting that the two coastal areas are seen as being strongly pro-Brexit. Once the final area has declared, the stage will be set for Chief Counting Officer Jenny Watson to formally announce the national result in front of the television cameras in Manchester.

6 Returning to Ireland to buy a home: are there any incentives on offer?