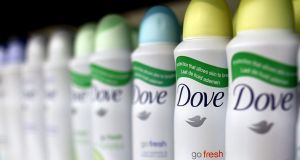 The Anglo-Dutch company, which makes Dove, dropped about 7 per cent on the London Stock Exchange following a joint statement.

Shares in Unilever have slumped after US food giant Kraft Heinz called off its proposed $143 billion (€135 billion) mega-merger with the consumer goods firm.

The Anglo-Dutch company dropped about 7 per cent on the London Stock Exchange following a joint statement by the two companies on Sunday which said Kraft Heinz had “amicably agreed” to withdraw its proposal.

Unilever had issued a strongly-worded rebuttal on Friday after the Chicago-based company tabled an offer representing an 18 per cent premium on Unilever’s closing share price on February 16th.

If successful, the deal would have been the biggest acquisition of a British company on record based on offer value.

The proposed tie-up was expected to meet strong political opposition, with prime minister Theresa May said to have asked officials to look at the deal before it was abandoned.

Ms May vowed last year to devise a “proper industrial strategy” to defend UK companies from being snapped up by foreign firms.

US and Asian businesses have ramped up their interest in buying British following the pound’s 17 per cent plunge against the US dollar since the Brexit vote.

George Salmon, equity analyst at Hargreaves Lansdown, said it was surprising to see the deal shelved just one business day after the news broke. “The deal was set to top £100 billion (€117 billion), so the size premium would always have been a consideration – especially since Warren Buffett, one of the biggest names behind the bid, hardly has a reputation for paying anything other than the price he sees fit.

“What exactly happened in this whirlwind of a story is yet to be fully revealed, but it looks like Unilever isn’t just playing hard to get.

“It was always going to be a difficult pitch to convince shareholders to relinquish their grip on Unilever, given the expectations for the company to keep churning out resilient growth in the years to come.”

Kraft came under fire in 2010 after pledging to keep a Cadbury factory open in Somerdale near Bath, only to change its mind soon after securing a £11.5 billion hostile takeover of the UK chocolate firm

In 2012, the business spun off the Dairy Milk-maker into a new company called Mondelez.