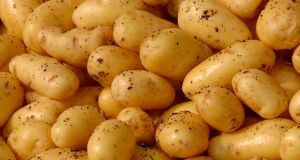 The IFA and Teagasc have begun a trial to increase acreage given over to baby potatoes. Photograph: Thinkstock

The acreage devoted by Irish farmers to potatoes has hit a 20-year low this year and yields are likely to be down by some 15 to 20 per cent, the Irish Farmers’ Association (IFA) has said.

“We have had the smallest area of potatoes grown ever on record. It’s the lowest in 20 years,” said the IFA’s national potato development officer, Pat Farrell.

There was a sense, he added, that farmers weren’t devoting as much acreage to potatoes due to a general fall in consumption, but prices had also been bad in recent years. “It was very high [acreage] in 2011 and it was a disastrous year for prices. Then, in 2012, the acreage came right back, and it went up again in 2013. It was up again last year, but it’s dropped right down again this year.

“It’s at the stage where, if we let it drop any further, we’ll end up that we won’t have a sustainable industry.”

The amounts grown this year should ensure that farmers obtained a “reasonable price”, he said.

Prices had improved for the new-season potatoes, but “already efforts are being made by retailers to reduce that price”.

An “image” issue had also led to a reduction in consumption of potatoes, but baby potatoes were overtaking the traditional soil-covered spud in popularity, according to Mr Farrell.

He said the promotion of baby potatoes in recipes used by certain diet companies meant they were becoming more popular. Consumers also saw them as more convenient because they cook faster and do not require the same cleaning.

“I don’t think they taste as good as the traditional potato though,” Mr Farrell said.

Irish production of baby potatoes has not kept up with demand, and a trial has been under way between the IFA and Teagasc to double the acreage devoted to them.

“They’re nearly ready to be harvested, maybe this week or next week. We already do 250-300 acres and we are hoping initially to double that,” Mr Farrell said.

About 3,000 tonnes of baby potatoes are grown here every year, with a further 20,000 tonnes imported from countries such as the UK, France and Israel.

An annual EU-funded marketing campaign to promote potatoes will begin next month, with a budget of some €300,000 devoted to giving spuds an image boost in time for the winter.

In a report at the end of August, the IFA said retail potato sales remained sluggish due to the last week of the summer holidays. “However, we should see a resurgence over the coming weeks as school resumes.”

Slower sales had “unnerved” a few Queen growers, but normal service should begin to return this week, and farmers were urged to remain patient.