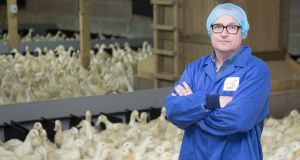 Silver Hill was established by Ronnie and Lyla Steele in 1962 on “a piece of land as close as they could get to Dublin, that they could afford”.

A debate on the merits of rearing turkeys or chickens led to the compromise that would create one of the Monaghan’s largest employers and one of the industry’s most respected duck producers – Silver Hill Farm.

The current managing director of the business is Stuart Steele, son of Ronnie and Lyla, who lives on the farm with his wife, artist and designer Helen Steele, and their children, Halle, Chloe and Ronnie, whom he hopes will one day inherit the business.

Silver Hill plans to increase capacity to 150,000 ducks per week over the next two years.

“It might sound like huge numbers, but we do everything the artisan way. When you consider that some Irish chicken farms might produce a million chickens per week, that puts things in perspective,” says Steele.

“We work to produce the best quality duck in the world. We produce with the welfare of the bird at the fore,” says Steele, who was one of the first people to sign up to Bord Bia’s Green Origin charter, which seeks to enable Ireland’s farmers and food producers to set and attain targets in relation to the sourcing of raw materials, manufacturing processes and social sustainability.

“We are a low volume producer in a high cost environment, so it’s people that want the best product who buy our duck,” he says.

Silver Hill ducks are bought by many top class restaurants in Ireland and the UK. Celebrity chef Heston Blumenthal has filmed at the farm, and the company supplies 98 per cent of the European market for head-on ducks.

Being one of the most prized items on a Chinese banquet restaurant menu, the Monaghan ducks can sell for €75 in restaurants in Singapore, which is a growing market for the company.

“We are flying out fresh birds and shipping out frozen birds to Singapore; there are huge costs involved but we are determined to do it. It’s a growing market and the potential there is huge. I see a time soon when that market will be more valuable to the company than Europe,” Steele says.

The business has seen a 20 per cent increase in staff numbers in the past two years to 180, but pending demand for management, R&D, IT and sales roles, that will increase to 235 in the next three years.

Product development is done through Silver Hill’s breeding programmes. “It’s all about taste,” says Steele whose duck has been called the ‘wagu of duck’.

“We don’t let our breed of duck outside of our company, the Silver Hill duck is our own particular breed and we don’t sell it under any other name.”

Retail sales have taken off in the past five years. “The retail market has tripled for us in the last four years. It was a case of getting a professional head of sales manager to manage the process to allow customers to be able to access our products in shops,” says Steele.

The Asian market is a growing one for Silver Hill, which has opened a sales platform in Singapore and in Malaysia, where they currently supply more than 20 restaurants. They are also looking to expand further into Japan, Thailand and Hong Kong.

“We are building a new production facility in the next year or so which will see another huge investment and which will be engaged in primary processing and cooking.”

Silver Hill has landed a host of food awards for various products, as well as qualifying for the Deloitte Best Managed Company award six years running.

The 1990s saw much innovation in terms of food development at the company. “We wanted to go after the Chinese Beijing-style duck market [think of the ducks hanging up in restaurants in Chinatown] and it took a lot of product development,” says Steele.

“We started using the likes of ultrasound scanners on our live birds to measure the fat and meat content, which takes the guesswork out of breeding.

“It costs a lot to produce our product, therefore we had to give people a reason to buy it, so innovation is vital to our business. If we rest on our laurels we are actually going backwards.”

Despite the investment in innovative technology, Steele says that the majority of production at Silver Hill is done by hand.

“Everything other than the plucking is done by hand,” he says. Even the down and feather by-products are processed and made into duvets, pillows and cushions for a number of retailers both here and in the UK.

Competing on price with cheap imported, machine processed Asian product was never really an option, Steele says, so Silver Hill made the conscious decision “to concentrate on the top 10 per cent of the market”.

“We are proud and honoured to be able to do it from Monaghan. We are very proud of our Monaghan roots. I’ve travelled all over the world and there is nowhere else I’d rather live,” says Steele.

Steele’s parents Ronnie and Lyla still come into the office every day to “keep them on their toes”, but he says that a number of years ago he realised the business had to move with the times, which largely means Steele getting out of the way of the professional managers they have recruited to run and develop the business.

“We are in business more than 50 years, but in many ways we are only starting out, so you have to change with the times.”