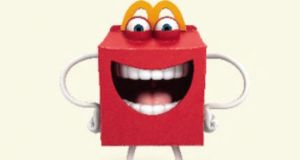 Happy is part of McDonald’s strategy to introduce healthier food onto its menu for children. Image: McDonalds via Bloomberg

The box-shaped creature - with Gumby-like arms, eyes that pop out of the top of his head and a gaping mouth filled with large teeth - was intended to promote healthier Happy Meals for kids. So far, though, it’s mainly drawn alarm and ridicule on social media.

Since debuting on Twitter in an official McDonald’s post yesterday, Happy has elicited responses such as “I think I’m going to have nightmares,” “What the f--- is that creature?” and “THAT! is scary!” A video featuring Happy was posted to the McDonald’s Facebook page, drawing additional scorn: “Epic fail,” “I regret watching this” and “This makes me crave Burger King.”

McDonald’s hopes the character gets a friendlier reaction from children. The mascot “is about bringing more fun and excitement to kids’ meals, including eating wholesome food choices like low-fat yogurt,” Oak Brook, Illinois-based McDonald’s said in a statement. Happy will encourage kids to eat more fruits and vegetables and to bypass soda in favor of milk, juice or water, the company said.

Kristin Hylek, a McDonald’s spokeswoman, didn’t respond to a request for comment on Happy’s social-media reception.

As America faces an obesity epidemic, the world’s largest fast-food chain is trying to improve nutrition, including in the meals it sells to kids. The chain started automatically including apple slices and a smaller portion of french fries in its Happy Meals in 2012. McDonald’s plans to offer low-fat yogurt as a children’s side dish beginning July 4th.

Last month, the Ronald McDonald clown mascot got a makeover too, part of a push to attract new customers to the burger chain. The character now dons yellow cargo pants, a red blazer and a striped rugby shirt.

McDonald’s isn’t alone in making changes. Burger King Worldwide (BKW) said yesterday that it’s ditching its 40-year-old “Have It Your Way” slogan for the new “Be Your Way” tag line. The move is meant to better connect with consumers worldwide and highlight the chain’s customisable sandwiches.

Happy, meanwhile, isn’t totally new. The toothy box character was introduced in 2009 in France and has since made its way into other countries in Europe and Latin America. He’ll begin appearing in US McDonald’s nationwide on May 23rd.

Happy and the new yogurt option will “give kids and parents something to look forward to during their next trip to McDonald’s,” the company said.