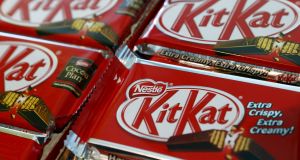 The Nestle logo is seen on KitKat chocolate bars during a news conference at the company headquarters in Vevey, Switzerland

Food group Nestle said it expected softer pricing and growth in line with last year in 2016 after full-year organic growth of 4.2 per cent fell short of expectations, failing to show the hoped-for improvement in the fourth quarter.

Like its peers, Nestle has had to deal with slower growth and more demanding consumers in emerging markets, notably China, while sales in India have been dented by a Maggi noodle recall.

“We anticipate that our trading environment in 2016 will be similar to previous years with even softer pricing,” the maker of Nescafe instant coffee and Pure Life bottled water said in a statement on Thursday.

“As such we expect to deliver organic growth in line with 2015, with improvements in margins and underlying earnings per share in constant currencies, and capital efficiency.”

Net profit at the group based in Vevey on Lake Geneva fell to 9.1 billion Swiss francs ($9.19 billion), lagging the average estimate of 9.98 billion francs in a Reuters poll. It had of a one-off gain linked to L’Oreal and Galderma in 2014.

The company, whose brands span from KitKat chocolate bars to Gerber baby food, proposed raising its dividend to 2.25 francs from 2.20 francs a year ago, in line with market expectations.

At 4.2 per cent underlying “organic” sales growth -- which is adjusted for currency swings, acquisitions and divestitures -- in the full year was in line with the nine-month period, making 2015 the third year in a row where growth fell short of the group’s 5-6 per cent long-term target that was not mentioned in the earnings statement.

1 How well paid do you think you are? Here’s how to work it out
2 Life as a Facebook moderator: ‘People are awful. This is what my job has taught me’
3 AIB to sell more than 500 ATMs to Brink’s
4 Wealthy investors’ legal challenge against Revenue fails
5 Flight attendent seeks High Court injunction against Aer Lingus
6 Accumulated profits at Marian Finucane firm exceeded €830,000
7 Dublin down nearly 4% as coronavirus hits markets
8 Former top Department of Finance official David Doyle dies aged 70
9 Teva launches State’s first inhaler recycling programme
10 Coronavirus and the etiquette of working from home
Real news has value SUBSCRIBE