Lir Chocolates seeks to sweeten the bitter taste of Brexit

With Brexit looming, Lir Chocolates seeks at diversify its export sales away from the UK 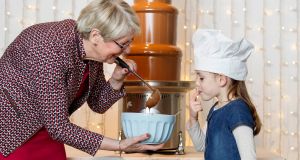 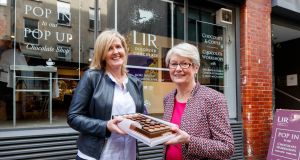 I’m struggling to hear Murray, the managing director, and Connie Doody, Lir’s co-founder, above the inner monologue warning me not to swan dive on to the plate of chocolates on Murray’s desk – that chewy pecan caramel has been eyeballing me since I arrived.

“Try the cinnamon and raisin cream – it’s gorgeous. You’ll go on a journey with that one,” says Doody, as the conversation returns to chocolate.

Don’t mind if I jolly well do, thanks. We’re having a marvellous time, sitting here munching chocolate. This is a bit like being at a tasting session in a winery, I tell them, only without the spittoons.

“Don’t spit these out!” laugh both women in unison. There is little chance of that. Still, its hard to resist the lure of the chocolate as we discuss the minutiae of the business: how diversifying its markets to dilute the effects of Brexit, as well as reconnecting customers with the Lir brand’s luxury roots, are the twin planks of its current strategy.

Doody co-founded Lir with former senator Mary White three decades ago in her kitchen. White cut her ties with the business in 2014. Now a year or two the senior side of retirement age, the charming Doody still works two days a week as Lir’s technical director and is revered as a “chocolate guru”, says Murray, who herself took the executive reins only 18 months ago.

Both women sit on Lir’s board of directors.

What would be a chocolate guru’s favourite chocolate?

“Over the years, I would have said a really good praline can be absolutely great. But it has to be right,” says Doody. Murray, a former Kerry Group and Green Isle Foods executive who was in beauty products in the UK before joining Lir, likes the cinnamon ones. Then again, why choose? It’s surely logical, and more fun, to try them all.

Lir, which is now wholly owned by German food brands company Zertus (Doody and White sold their stakes as part of an estimated €8 million deal with a UK company in 2007), views itself as one of Ireland’s best-kept exporting secrets.

About 90 per cent of its more than €27 million sales come from abroad. The company is profitable, and growing at about 5 per cent annually, says Murray.

It exports overwhelmingly to the UK where it supplies chocolates for the own brands (Murray prefers the term “retailer brands”) of major grocery chains such as the Co-Op and Marks & Spencer, while it also supplies all of the big indigenous grocery retailers at home.

It also has lucrative licensing deals with Diageo to produce Baileys chocolates in Europe, and Guinness chocolates worldwide.

After exports and retail own brands, the third string in its bow is Lir’s own eponymous brand. In the wake of celebrating its 30th anniversary year, it is spending €300,000 relaunching its own brand in its home market, with the luxury Discovery collection. Murray sees it as a return to Lir’s artisan producer roots, with “beautiful chocolates wrapped in beautiful boxes”.

This week, the company also relaunched its website and opened a one-week pop-up shop off Dame Street in Dublin as a marketing exercise.

Lir is also devising fresh plans to enlist its German shareholder to help it expand into northern Europe and, potentially, it may also look to grow the US, as it tries to counter the very real threat of Brexit through diversification. If the Brexit talks, as looks a distinct possibility, conclude without a proper deal and no trade agreement, the cross-Border food industry could be hardest hit by any possible return to tariffs.

“The UK will always be an essential market,” says Murray. “Any Irish food exporter will tell you the same thing. Even before Brexit reared its head, we were saying that being dependent on a single market, and in a different currency than the one in which you deal, is not the healthiest.”

Lir employs more than 150 staff at its Navan plant, which can more than double during peak periods such as right now, when it is producing chocolates for the Christmas market, as well as eggs for next Easter.

We head downstairs to the factory, don our white coats and hair nets, and I suppress my inner Augustus Gloop, although this is no Willy Wonka madhouse.

As the company’s technical guru, Doody holds great sway on the factory floor. She explains the production processes in great detail, and it is clear that almost everybody around here defers to this sprightly woman whenever she walks the floor.

Even Murray, who is ostensibly Doody’s boss, admits the more mature lady remains essential to Lir’s smooth operation, the sort of concession that can only ever be made from a position of confidence.

There are two main production lines at Lir’s plant, one mainly for retailer branded chocolates, and another for more complex sweets. There is a degree of automation, but the bulk of the work is done by hand.

All around, women (and the company’s employee base, from the top rung to the factory floor, really is dominated by women) pour flavoured chocolate mixtures, which has been prepared onsite, into moulds. The temperatures have to be absolutely correct. An automated line drags the moulds into cooling machines as the chocolates set. Then they are all rolled with decoration or spray painted by hand and delicately packed.

At one end of the factory floor, a machine spins liquid chocolate around oval-shaped moulds: this is how Easter eggs are born. The cooled eggs emerge at the other side, and, again, are spray painted by hand.

Next door, in the packing section, the eggs are being packed by hand. They’re too fragile to be sucked out by hydraulics.

Murray explains that the relaunched Lir brand collection, which is pitched at more luxurious level than some of its other products, will be available in Tesco in Ireland by the middle of this month, and “hopefully” Dunnes and SuperValu in the lead-up to Christmas.

If you are looking to reduce currency risk and reduce reliance on the UK market, it makes sense to target the booming economy on your own doorstep.

Of the three “pillars” of Lir’s business, the Diageo lines and retailer brands are mostly exported. About 50 per cent of the Lir-branded chocolates are exported, mostly to the UK, although this “pillar” contributes less overall to the top line than the others.

“I would hope that in a couple of years, the three pillars would be the same width,” Murray explains.

It already sells a small amount of Guinness chocolates and Lir brands in the US, but it is assessing its options for further growth. From her Kerry days, Murray knows that the US consumer market “will find you out pretty quickly” if it isn’t done right.

Lir is working closely with Bord Bia and Enterprise Ireland on a strategy to diversify its export markets. Murray says that Zertus will make sufficient investment available.

Lir’s master chocolatier, Patricia Brady, was “employee number three” 30 years ago, says Doody. It is relatively rare to see an Irish manufacturing business that is so dominated by women at all levels, although Doody brushes off any suggestion that it ever mattered.

Perhaps she is correct, and we view these things through a more sensitive prism today.

While Murray plots Lir’s future in a post-Brexit world, Doody remains a direct link to its heritage.

Will she ever give it up?

“I’ll keep doing the role while they still want me to, and while I’m enjoying it. If it gets too much for me, I’ll stop,” smiles Doody.

“All joking aside, her role is critical at the moment,” says Murray. “We intend to keep the way Connie and Mary built this company up, slowly over time. Although, maybe we might be a little bit bolshier about it this time.”