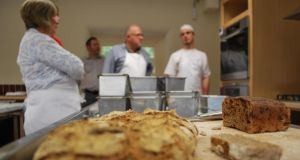 “The speciality food market in the Republic of Ireland is valued at €450 million, and this figure is set to increase as Irish consumers are showing a heightened interest in artisan foods,” said Good Food Ireland managing director Margaret Jeffares

Many heads of food companies believe the horse meat scandal will have a positive effect on their enterprises and drive growth this year, new research commissioned by marketing body Good Food Ireland has found.

The study of more than 600 food-related businesses that are members of Good Food Ireland showed that 97 per cent expected turnover to increase or remain the same this year.

Asked about the horse meat scandal, food businesses said that while it had damaged the reputation of the food industry, small suppliers and local artisan producers were coming out of the scandal stronger.

The report said the horse meat scandal had “presented opportunities for Irish quality artisan producers overseas. As always in adversity, there can be opportunity.”

Good Food Ireland managing director Margaret Jeffares said consumers were increasingly voting with their wallets and choosing to buy quality food they could trust. “The speciality food market in the Republic of Ireland is valued at €450 million, and this figure is set to increase as Irish consumers are showing a heightened interest in artisan foods,” she said.

“Although price is always a factor, particularly given the troubles the domestic economy faces, consumers have also become concerned with sustainability issues, traceability, provenance and organic farming.”

Some 88 per cent of businesses surveyed said they expected an increase in earnings this year, and four out of five said they had achieved their earnings expectations last year.

Ms Jackson said the survey also showed strong support for regulation to ensure the traceability and provenance of food.

While food businesses often complain about excessive regulation, more than 70 per cent of those surveyed said they would welcome regulation that placed renewed emphasis on food sustainability such as traceability and provenance.

“High food safety standards can and should be further exploited as a differentiator in leveraging our Irishness,” the report said. “Ireland must be at the heart of the solution to the problem we found and capitalise on it as a key differentiator of the Ireland food brand.”