Guinness brings out a non-alcoholic version of the black stuff

Diageo rolls out Guinness 0.0 to whet the appetite of younger, health-conscious drinkers 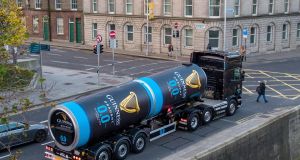 Guinness 0.0 is being rolled out next week. Photograph: Aerial Photography Ireland via Andres Poveda

It is the black stuff but not as we know it. Diageo is rolling out a non-alcoholic version of Guinness, which it says is every bit as good as the product customers have enjoyed in the past.

Guinness 0.0 is being launched after a four-year development process led by the engineering and innovations teams at St James’s Gate in Dublin. Its makers claim it looks and tastes the same as a regular pint, with alcohol the only thing that is missing.

The no-alcohol version is brewed using the same ingredients but with a cold filtration process used to filter out the booze.

The claim that “Guinness is good for you” may have been widely discredited, but its makers are no doubt hoping that they can at least claim it isn’t too bad for you. The company points out that the no-alcohol version contains just 16 calories per 100ml, meaning a standard can contains 70 calories in total.

“We know people want to be able to enjoy a Guinness when they choose not to drink alcohol without compromising on taste, and with Guinness 0.0 we believe they will be able to do exactly that,” said Gráinne Wafer, global brand director.

Guinness 0.0 will be available from next week in supermarkets, with plans afoot to also make it available in bars in early 2021.

This is by no means the first time that Guinness has sought to reduce the amount of alcohol in its products.

Guinness introduced its first non-alcoholic craft lager called Pure Brew in Ireland in 2018. A year earlier it rolled out Guinness Zero in Indonesia. It was also behind Kaliber, a lager which launched in 1986.

Guinness Light, which while not totally alcohol-free, was a lighter stout introduced by the company in the 1970s which proved a massive failure. With alcohol consumption having declined in recent years, however, particularly among young people, Guinness will be hoping that its new product doesn’t meet the same fate.