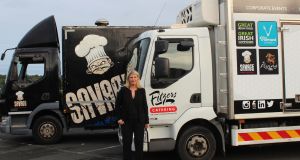 There are nine siblings in the Fitzpatrick family and all have ended up in the food business. Today, between them they run an outside catering company as well as Marco Pierre White restaurants in Dawson Street and Donnybrook and the Jamie Oliver restaurant in the Dundrum Shopping Centre.

The Fitzpatricks grew up in a foodie environment at home. Their father owned a fruit and vegetable shop on Dublin’s Camden Street and was a very progressive retailer. His was one of the first shops in Dublin to stock wholefoods. At a time when Irish cooking was all about meat and two veg, Fitzpatricks was one of the few places an adventurous cook could find unusual or exotic ingredients.

In 1979 the first of the Fitzpatrick siblings struck out on their own and opened Fitzers restaurant beside their father’s shop. This was followed by Fitzers at the National Gallery, the RDS and what was then the Point Depot.

Sharon Fitzpatrick is one of the youngest members of the family and she recalls washing dishes at the restaurant in her school uniform and working weekends and holidays there when she was growing up.

In 1988, she began what has since developed into Fitzers Catering (a separate company to the restaurants) and now runs it with a team of four, including her sister Paula, managing director Barry Storey and executive head chef Leonard Fearon.

In 1993 Fitzers Catering added a second string to its bow when it started catering at major music events and for film crews. This division was rebranded as Savage Food in 2005.

“The business has actually come through two recessions. Of course, the most recent one is the more vivid and we are still rebuilding from it,” Fitzpatrick says. “There was never any question of not coming through. It was very much a case of doing whatever was necessary to get back on track.”

Probably the biggest blow suffered during the recession was the loss of its contract with Croke Park.

“The issue was not that we did anything wrong, it was to do with the fact that we can’t compete on a number of levels with the big multinationals that have moved aggressively into our market,” Fitzpatrick says. “They have huge resources and can put up big money to secure contracts.

“They have so much buying power and generally don’t face the same tax regime as we do. They have also bought up many of the independent catering companies here along the way.

“What stands to us is that we have a really good reputation in our industry for service, delivery and innovation. Of course, we also reinvest our profits here. But there is only so much you can do when you’re a company of our size. Fortunately, there are still organisations out there that want an experienced and imaginative Irish company supplying their food.”

By the mid-2000s, Fitzers Catering had 120 full time employees and roughly 2,000 people on its part-time register. Its two biggest contracts were Croke Park and the Convention Centre.

The Croke Park contract went in 2013 and, says Fitzpatrick, “this was when our recession really began and we had to do a lot of adjusting. We had built up a really good team and we took the decision to keep the team together and not to let anyone go. We knew this would mean incurring a loss, but we felt we had to take this on the chin for the long-term good of the company.

“It actually took longer than we thought to replace the Croke Park business but 2014 was the only year in our history we lost money.

“Having operated the entire food and beverage contract at Croke Park from 2005 to the end of 2013, it was a large chunk of our business to lose in one go. We still had some large contracts such as the Titanic Centre in Belfast and the Convention Centre in Dublin, but the next year was tricky and required some careful management.”

One of the first things Fitzers Catering did to combat the loss of revenue was to start targeting smaller contracts rather than looking for one large contract to replace it. The company invested heavily in its sales team and took on extra staff to win contracts for once-off events in venues such as Dublin Castle, the Royal Hospital Kilmainham and Farmleigh.

“We also invested in our brand and took on O’Leary PR to promote Fitzers Catering and to make the most of the awards we had received such as the Taste of Ulster and the Deloitte best managed company awards,” Fitzpatrick says. “We completely redeveloped our website and also hired a social media manager to increase our presence on social media.”

Fitzers Catering continued to rebuild during 2015 and Fitzpatrick says its turnover is now almost back to where it was. The company now employs 75 people full time and has a panel of roughly 1,200 part-time staff. Key contracts include the Royal College of Physicians in Ireland, the Law Society, the Convention Centre, Slane Castle and Horse Racing Ireland.

“It’s a massive blow when you lose a big contract but what’s important is to adjust positively to the change,” Fitzpatrick says. “You have to regroup and work out a plan, get up to speed on what’s coming in terms of potential new business and then get out there and go after it.”