Quality key as fish shops and seafood bars reel it in 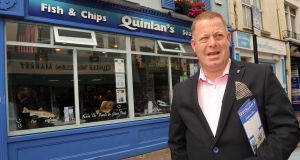 There are many hooks to the Quinlan’s Kerryfish story: when the company, which was founded in 1963 by a Danish firm, ran into difficulties in the late 1960s, the workers bought it out.

In 1996, the foreman of that group of workers, Michael Quinlan, took over the business. Now his three sons, who have had an interest in the business since they were knee-high, are running it together, each of them holding a different role.

The family began changing the model in the mid-1990s. As people’s appetite for local produce began to grow, the Quinlans set their sights on looking for retail space, opening two fish shops in 1989; one in Cahersiveen and another in Killorglin.

A few years later, soaring Celtic Tiger prices meant decent sites for new outlets were difficult to come by. Eventually they found two – one in Tralee, and another in Killarney – both at knockdown prices, and they opened their third and fourth fish shops in 2008, just at the beginning of the recession.

“We’re involved in catching as well as buying from different trawlers covering ports as far as Killybegs down to Portmagee. We have every species. Some are wanted here at the home market, some are for export: monkfish, mackerel, hake and prawns are fit for export to France, Spain and Italy; others like prawns, haddock and whiting are very popular here.”

“It also let us open up our fish shop at a knockdown price, because everything suddenly became much cheaper. When we moved into Tralee, there were 24 properties vacant, so we were a saviour to the area in that we brought a bit of life to the centre of the town.”

The fish shop was a runaway success so the company looked to expand on the idea. They decided to open a seafood bar in Killarney in 2011 at the tail-end of the recession, when prime property was easy to come by.

“My sister was in the restaurant business, so her experience helped us massively to get started,” Quinlan says.

“We pride ourselves in being able to say, ‘Cathal O’Shea landed in Portmagee with his crab last night’. Every species of fish has a trawler’s or a fisherman’s name attached to it, which is what our business is about, traceability, accountability and the local.”

The Quinlans have fresh fish shops in four locations around Kerry and three seafood bars. The philosophy and guiding principle is to offer the finest fresh fish available. “Quality wins the race; that’s what my father taught me.”

With the environment and sustainability becoming an ever-increasing and important topic, the fishery industry has a rising challenge ahead of them. Although Quinlan admits it can be difficult at times, the industry is better for it.

“The industry is healthier now than it ever was before. I remember 30 or 35 years ago, trawlers would come in and dump tonnes of whitefish on the pier, and leave it there, letting it go to waste. The regulations make a noticeable difference to the stock levels out at sea, and to price stability.”

It is also hoping for bigger bites from buyers abroad. When the business began, 90 per cent of its operations involved exporting produce, including to Japan, Egypt, and Nigeria. Now, the company’s biggest export market is Spain; and each year it receives significant orders from Germany for its award-winning smoked Irish salmon.

Through its website kerryfish.ie – one of the first Irish websites to sell seafood – Quinlan’s receives orders from all over the world, even from as far afield as Hong Kong. “People love the ‘green Ireland’ idea,” says Quinlan, “and as a country we’re not capitalising on that at all.”

1 How can I view my dead brother’s will if I’m not the executor?
2 Provisional liquidator appointed to Dublin engineering firm
3 Bursting of Tesla bubble a case of ‘not if, but when’
4 Finance Ireland’s IPO, Huawei and Irish 5G, and pay rises at Bank of Ireland
5 ‘Germans are very efficient and reliable. Cancelling is alien to them’
6 Bank of Ireland staff in line for 2.95% pay increase
7 US reiterates opposition to Huawei equipment being used for Irish 5G
8 Finance Ireland plans stock market flotation in May
9 What’s in a name change?
10 Must you pay a price for ethical investment?
Real news has value SUBSCRIBE