End of Chinese ban on Irish beef a victory for diplomacy 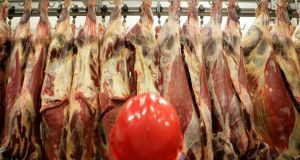 The writing has been on the wall for a while, but what a few weeks it has been for Irish beef – Ireland is now the only European country to be allowed to export beef to both the United States and China.

Chinese veterinary inspectors will soon begin to approve processing plants for export following the formal lifting of the ban.

Ireland’s food exports to China have more than doubled to €620 million since 2011.

Beef is not a big part of the Chinese diet, but it is a major niche, and in a market of 1.3 billion people, that translates into huge demand for Irish red meat, especially as newly rich consumers experiment with different diets.

It will be interesting to see how EU politics play out. Ireland is now competing with Australia, Argentina, Canada and New Zealand in the Chinese market, but the Danes and the Dutch have no access. They will want this access soon.

It is 17 years since Washington banned EU imports over mad cow disease, or BSE, the epidemic that spread from Britain to mainland Europe. China also banned EU beef during the BSE crisis.

Taoiseach Enda Kenny’s announcement that Ireland had reached agreement with China certainly has political ramifications, but this process has been going for many years now.

Gaining access to the Chinese market has been top of the agenda for successive ministers.

Minister for Agriculture, Food and the Marine Simon Coveney said that a “major step forward” had been made for Irish beef access in China during his visit last year.

While the ministerial visits make a big difference, the key to making these kind of agreements stick is the on-the-ground work by the embassy staff, and this agreement marks a coup for the Irish Embassy in Beijing. This was mentioned in dispatches by Minister for Foreign Affairs Charlie Flanagan, who noted how the Embassy in China had played a “huge role” in the agreement.

Ireland’s Ambassador to China, Paul Kavanagh, said there were three factors which persuaded China to place its trust in Ireland.

“First, the very high quality of Irish beef and of our entire production system, from field to fork – as well as the rigour of our State monitoring and control set-up which enjoys full co-operation from our farmers and our plants,” he said.

“In China, trust is everything. Win this and you’re in. Breach it and you’re lost! It takes years to win and it can be lost in an instant,” he said.

The second major factor was Ireland’s consistent, full-court press effort at all levels, from the leadership through the various political, administrative, technical and diplomatic levels, with the industry cooperating fully.

“It has been a genuine Team Ireland effort,” said Mr Kavanagh.

The Ambassador said the Chinese authorities have been open, fair and transparent in their response, in a similar way as they have been in opening the gates of the Chinese market to Irish dairy products.

Mr Kavanagh believes that the breakthrough on beef can be replicated in many other areas of trade and relations with China, such as education and foreign direct investment.

“So, with persistent effort the beef breakthrough ought to be replicated in many other areas of Ireland’s economic relations with China whose economy will be before long the largest in the world,” said Mr Kavanagh.