Did you hear the one about the self-milking cows? 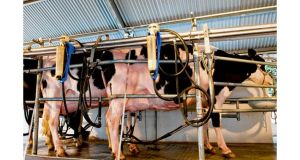 All jokes aside, robotic milking is easing the workload of Irish dairy farmers

A cow wanders into a stall, is scanned by a laser and milked without any farmer present. It may read like the start of a joke, but in fact is reality for many Irish dairy farmers, thanks to robotic milking systems.

The robotic milking system can milk cows at any time without the need for a farmer to be present. Farmers are free to do accounts, work the fields or even run another business.

Cows choose when to be milked and the data is recorded by the robot which can be accessed remotely by computer or mobile device. Farmers can thus check the health and performance of their herd .

Bird uses a Lely A3 astronaut robot to milk some 100 cows on a daily basis.

“Each cow has an identifying collar. The system identifies the cow by the collar and also measures and stores the activity of that cow,” he says.

“There is also a small microphone on the collar which records the rumination of the cow. Rumination is important as it can pick up a sick cow or a cow in heat.”

The co-ordinates of a cow are recorded on a computer, so the robot has a fair idea where the teats are located. A laser scans the udder to confirm the position and the teat cups are placed on individually in a matter of seconds.

But it’s not all plain sailing for Bird, there is still some work to do. “I make sure the robots are clean. When the cows are grazing, I make sure they have fresh grass. I am also on call 24 hours a day in case anything goes wrong.

While he believes the system is much easier on the cows, leaving them more relaxed, “it’s not a system that would suit everyone. It won’t work with fragmented farms, where cows may be located across a road”.

“Many people enjoy milking – I enjoyed milking every day but I believe this system is better both for me and my cows while optimising labour.”

Dairy farmer Ned McCarthy, from Kilnamartyra in Co Cork, began a yogurt-making business last summer, finding he had time on his hands following the installation of a Lely robotic milking system.

And he has already tasted success of the robot and the extra free time, with his artisan yogurt, winning a Great Taste Award in the UK and the Best Emerging Food Product Award at the Listowel Food Fair.

McCarthy supplies a range of six yoghurt products to farmers markets and shops in Cork.

“The robotic milking machine gives me more time to concentrate on the yoghurt,” he says.

“The price of milk has got very bad over the years. We are constantly being reminded how dependent we are on the world market for prices. It’s thus good to have another business.”

Robotic milking has not created a mad rush among dairy producers to install the equipment, rather it’s been a slow and steady movement that is beginning to gain momentum, according to Dr Padraig French, head of dairy research at Teasgasc Moorepark.

“There has been a huge increase in robots for milking in Ireland over the last 12 months.”

It’s all part of a Teagasc project to investigate the most cost effective and efficient method of integrating automated milking systems into pasture-based dairies.

The cows were previously milked in a traditional parlour, but adapted very well to the robotic system, according to French.

He believes the robots are not more productive than the traditional milking system, but have the advantage of freeing up labour.

“The robot is milking 24 hours a day, 365 days a year. With the traditional system the cows were just milked morning and night, so if the farmer was somewhere, he would have to rush home to milk them.”