Climate change advisory body to be established this week 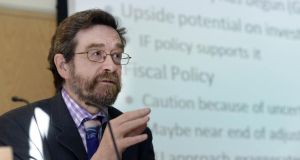 The Government will establish an expert advisory council on climate change and appoint its 10 members later this week, sources have confirmed.

The council’s primary purpose is to assess Government progress in cutting carbon emissions.

The new body is seen as a landmark in the development of State climate policy.

It will be chaired by economist John FitzGerald, who retired from the Economic and Social Research Institute (ESRI) last year.

The 10-member council will comprise four ex-officio members from the Environmental Protection Agency (EPA), Teagasc, the Sustainable Energy Authority of Ireland and the ESRI, as well as six independent members.

Professor of environmental policy at University College Dublin Frank Convery, and professor emeritus of European agricultural policy in the Department of Economics at Trinity College Alan Matthews, are expected to be appointed to the council.

Perhaps controversially, Prof John Sweeney of NUI Maynooth, considered by many as the State’s foremost authority on climate change, is not expected to be included.

The Government’s long overdue climate change Bill, designed to transition the State to a low-carbon economy by 2050, enters committee stage in the Dáil this week.

The Climate Action and Low Carbon Development Bill 2015 has been criticised by campaigners for not including long-term emissions-reduction targets, similar to those enacted into law in other European countries.

The Bill provides for the establishment of an independent advisory council.

The Government appears, however, to have jumped the gun in moving to establish the body before legislation is passed.

“We welcome the news that the Government is to launch the climate advisory council,” said Oisín Coghlan of Friends of the Earth. “It’s long promised and long overdue. But the key test is not just the calibre of the people appointed but whether they are given the explicit legal protection to do their job independently.

“The Bill aims for a low-carbon Ireland but doesn’t say what that means. We think the Bill should include a simple 80 per cent emissions reduction target like recent law in Finland. At the very least the Government’s own definition of low carbon should be included in the Bill. Without that clarity the law will fail to deliver the climate action it promises,” he said.

The EPA believes Ireland will struggle to achieve its EU greenhouse gas (GHG) emission reduction targets, which insist on a 20 per cent reduction by 2020 on 2005 levels.

Emissions associated with increased levels of agricultural activity envisaged under the Government’s Food Harvest 2020 plan and with the recent abolition of milk quotas pose the greatest threat to emissions targets.

Emissions from the agricultural sector, based on data given by Teagasc to the EPA, are projected to increase by 2 per cent between 2013 and 2020, even with various efficiency measures being adopted.

This is principally down to a projected increase in dairy cow numbers of 21 per cent between 2013 and 2020 following the abolition of milk quotas this year.

Experts believe changes in the structure of agricultural production as well as land use generally will be required if future targets are to be achieved and post 2020 fines avoided.

Minister for Agriculture Simon Coveney is, however, lobbying Brussels to have Ireland’s targets re-assessed for the next compliance period to reflect the disproportionate size of the agricultural sector here.