Company expects pre-tax profit to climb to £7.1 million for the year to June 28 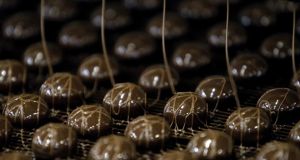 The company expects pre-tax profit before exceptional items to rise to £7.1 million for the year ended June 28 from £4.7 million a year earlier.

Thorntons also said it had secured support of its existing lenders who agreed in principle to provide an increased unsecured committed revolving credit facility of £75 million, running through October 2018.

Thorntons reported a 7.6 per cent drop in the third-quarter sales, hurt by early spring deliveries in the second quarter and lower UK commercial sales.

Consumer sentiment remained subdued in the wake of sluggish wage growth and a pick-up in inflation, prompting Thorntons to close some of its stores in the third quarter and focus on online business.

Thorntons shares were up 2.6 per cent at 109.75 pence in morning trade on the London Stock Exchange.

1 How safe is it to go back to the office?
2 Elderly parents living in property you own will save you on capital gains tax
3 More than 40% of help-to-buy recipients already had deposit
4 Most workers now expect choice to work from home part-time
5 Owner of Dundrum Town Centre to sell prized assets
6 Cinema tensions laid bare by deep crack in theatrical release windows
7 Construction workers among first PTSB borrowers off payment breaks
8 Regeneron says its antibody cocktail prevents and treats Covid-19 in animals
9 First-half revenues and profit rise at Keywords Studios
10 Stocktake: Is the shoeshine indicator flashing red for stocks?
Real news has value SUBSCRIBE