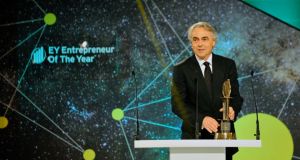 Brian Hogan of contract catering, restaurant and hospitality service provider KSG was named as the winner of the industry category at the EY Entrepreneur of the Year awards last night.

Mr Hogan started off in the family business in the 1970s as a baker where he spent more than a decade baking from as early as 3am.

He went on to become chief executive of KSG in 1980, purchasing the business from his family in 1989.

The group now operates restaurant and hospitality services in the retail and commercial catering sectors and has grown to achieve an annual turnover of €50 million.

The company’s workforce is comprised of nearly 1,000 people operating in more than 110 restaurant locations nationwide where they prepare and serve fresh food to approximately 10 million customers a year.

“KSG is a remarkable example of an Irish company that has continuously evolved to meet the changing consumer environment,” said Frank O’Keeffe, partner-in-charge of EY Entrepreneur of the Year programme.

“That level of agility and foresight is not often common in companies of their size and it can be attributed to the vision of the entrepreneur at the helm,” he added.

Accepting the award, Mr Hogan stated: “Henry Ford once said you can take away my factories, just give me my people. Tonight’s award is for the 1,000 people in KSG.”

Speaking afterwards, Mr Hogan said he was “absolutely staggered” to win the award considering the quality of the other candidates in the industry category.

He said the last award he won was for sprinting while at school.

“The economy is changing. The world is changing. You must be one step ahead all the time. That is why we are not a restaurant business anymore but instead a catering business,” he added.

The other finalists in the industry category for the EY Entrepreneur of the Year were: Séamus McKeague of Creagh Concrete Products; Liam Woulfe of Freshgrass Group; John Rice of Jam Media; Caroline Keeling of Keelings; Martin Hamilton of Mash Direct; Peter Dixon of Kellen Investments and Jimmy Martin and Austin Ryan of AMCS Group.

The winners were selected by an independent panel of judges chaired by Pádraig Ó Céidigh.