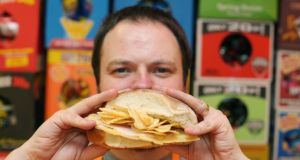 Business inspiration can come from the funniest places. A spoof article on satirical news website the Ulster Fry has led to the “world’s first” crisp sandwich shop.

Earlier this month, Seamus O’Shea and Billy McWilliams penned a joke article for The Ulster Fry about “a new restaurant aiming to give a trendy makeover to that staple of the Northern Irish dinner table – the humble crisp sandwich”.

The story went viral on social media, and several media organisations picked it up not realising it was a joke.

However, what started as a spoof, quickly became a reality, when Belfast businessman Andrew McMenamin decided to transform his cafe into a real-life crisp sandwich shop.

After reading the article, McMenamin contacted The Ulster Fry to see if they wanted to team up in creating a crisp sandwich café.

He had already seen the popularity of the Cereal Killer Café, a café which sells only breakfast cereal, and believed there was similar potential in crisps. The crisp sandwich shop – Simply Crispy – opened earlier this week and sold out within two hours. It has 35 different flavours of crisp on the menu, with Tayto cheese and onion being the most popular.

Now the business could soon be heading for Dublin. O’Shea said he has been approached by a Dublin business that wants to run the franchise.

1 How to avoid a communication breakdown
2 How much state pension will I get next year?
3 Brexit to curb services trade with UK, accountants group warns
4 PTSB plays down Ulster Bank talk as it sells €1.4bn of loans
5 Am I crazy to consider switching to an Ulster Bank mortgage?
6 ‘It’s fantastic living here – in the gateway to Asia’
7 Oxford Covid vaccine trials offer hope for elderly
8 Can we finally say farewell to the scourge of hot-desking?
9 Irish tech company Asavie acquired by Nasdaq-listed Akamai
10 Help, I’ve no PRSI stamps – can I still get a pension?
Real news has value SUBSCRIBE