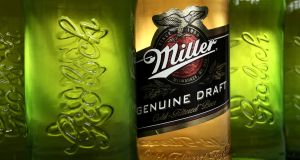 Anheuser-Busch InBev has agreed in princple to buy SABMiller for about £68 billion pounds (€92 billion), raising its bid after several rejections to clinch a record industry deal.

It will bring one out of every three beers sold worldwide under a single company.

The Budweiser maker will pay £44 a share in cash for a majority of the shares in its nearest competitor, the companies said in a statement on Tuesday, gaining brands such as Peroni and Grolsch and giving it control of about half the industry’s profit.

The price is 50 per cent above SABMiller’s closing value on Sept 14th, the day before speculation of a deal surfaced.

“We think that this is good value for SAB,” said Alicia Forry, an analyst at Canaccord Genuity. “It’s great that they’ve come to a point where the valuation is agreed, and we expect ABI in due course to make a firm offer.”

After years of speculation, the deal has been hastened by the impact of slowing economies in the emerging markets of China and Brazil.

A 20 per cent drop in SABMiller shares in the months preceding AB’s approach and the prospect of an end to cheap credit also served as a catalyst to a takeover.

The agreement, which is tentative, caps more than two weeks of back and forth negotiations over the price.

SABMiller said its board is prepared to recommend it. Under UK takeover rules, AB has until 5pm on Wednesday to make a formal offer but the companies have agreed to seek an extension of that by two weeks to have time to formalise the agreement.

AB agreed to pay a fee of $3billion if it fails to get approval from regulators and shareholders for the purchase.

The new company will be incorporated in Belgium. SABMiller’s two largest shareholders, Altria Group and Bevco can receive cash and stock valued at £39.03 a share for their stakes which account for 41 per cent of the company.

They won’t be able to sell the shares for five years and will have the right to nominate directors.

AB InBev was little changed at €98.35 in Brussels. The UK brewer spurned previous proposals, including one AB made public on Oct 7th that valued the company at about £65.2 billion.