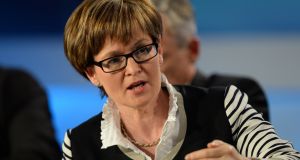 Mairéad McGuinness MEP: had claimed that ABP had not “at this stage” notified the Competition and Consumer Protection Commission of the proposed deal to buy half of Slaney Foods. Photograph: Alan Betson/The Irish Times

Larry Goodman’s ABP Foods says it fully intends to notify the competition authority of its plan to acquire a 50 per cent stake in Slaney Foods. This follows a claim by Fine Gael MEP Mairéad McGuinness that the processor had not “at this stage” notified the Competition and Consumer Protection Commission of the proposed deal.

Farmers’ groups have expressed concern about the acquisition, which, if ratified, would give ABP control of a quarter of the beef processing industry here.

Slaney Foods, the parent company of Slaney Meats and Irish Country Meats, is jointly owned by the Allen Family and Linden Foods in Northern Ireland.

The plan is for ABP to acquire the Allen family’s 50 per cent stake, creating a new partnership with Linden. Financial details of the proposed transaction have not been disclosed.

ABP told The Irish Times that it was still working through various aspects of the deal and fully intended to notify the commission.

“Last week we announced our intention to enter into a 50/50 joint venture with Linden Food Group in respect of Slaney Foods,” a spokesman said. “The details are being worked through and, once agreed, will be forwarded to the relevant competition authority at the appropriate time,” he added

The Competition and Consumer Protection Commission earlier confirmed that ABP had not yet notified it of its intention to buy a stake in Slaney.

However, the commission said that firms were not obliged to notify a merger within any specific time period, while noting any relevant merger cannot be put into effect until the commission issues a clearance decision.

In an earlier statement, Ms McGuinness said the commission had confirmed to her in a letter that ABP had “not at this stage notified the commission of its intention to acquire a 50 per cent stake in Slaney Foods”.

She also stated that it had confirmed that there was an onus on companies to notify it where they satisfied thresholds set out in competition law. “Failure to notify in cases where the thresholds are met, voids the transaction,” she said.

* This article has been amended

Technology really can be stranger than fiction at times 05:30
Chris Horn: Board tips for start-up chief executives 05:29
Davy board to search for other potential cases of wrongdoing 05:23
Davy bows to Government pressure with statement 05:05
Belfast haircare brand We Are Paradoxx raises £3m 05:01

7 Technology really can be stranger than fiction at times

10 Amazon moves from film industry’s margins to the mainstream