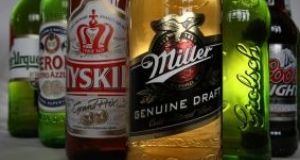 Anheuser-Busch InBev, the world’s biggest brewer, launched its $100 billion-plus offer for nearest rival SABMiller on Wednesday and agreed to sell the latter’s stake in US venture MillerCoors in a bid to win regulatory approval.

AB InBev said it had agreed to sell SABMiller’s 58 per cent stake in MillerCoors to the venture’s other major shareholder, Molson Coors, for $12 billion.

AB InBev, whose takeover of SABMiller would be one of the largest mergers in corporate history, said it expected to achieve $1.4 billion in annual synergy savings four years after completion of the deal, projected for the second half of 2016.

The new brewing giant will combine AB InBev’s Budweiser, Stella Artois and Corona brands with SABMiller’s Peroni, Grolsch and Pilsner Urquell and brew almost a third of the world’s beer, dwarfing major competitors such as Heineken and Carlsberg.

The takeover, which SABMiller’s board provisionally accepted last month, would be the largest of a British-based company and the fourth-biggest overall of any corporation.

By buying SABMiller, AB InBev would add Latin American markets such as Colombia and Peru and crucially enter Africa at a time when some of its home markets such as the United States are weakening as drinkers shun mainstream lagers in favour of craft brews and cocktails.

Africa is expected to see a sharp rise in people of legal drinking age and has a fast-growing middle-class developing a taste for branded lagers and ales rather than the illicit brews traditionally drunk.

Based on Tuesday’s closing share prices and current exchange rates, the offer is worth £70 billion or $106 billion.