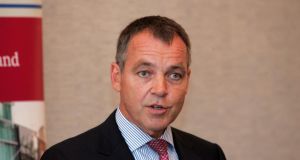 Christoph Mueller: anger at agm over his salary.

Shareholder Anthony Dunne asked how it justified Mr Mueller’s salary. “There was a big row over Bank of Ireland’s Richie Boucher’s €800,000 a year salary and the Government are in hot water over it. We have an executive here on €1.3 million, which is unbelievable.”

Chairman Colm Barrington said the dividend of 4 cent per share to be paid for 2012 was “in recognition of the strong trading performance this year and our confidence in the future of the business”.

Ryanair’s chief financial officer Howard Millar accused Mr Barrington of “glossing over the obvious when there was a 25 per cent reduction in operating profits in Q1 .”