Advice from the dream homemaker: how to get that show house look 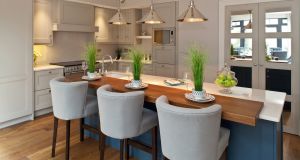 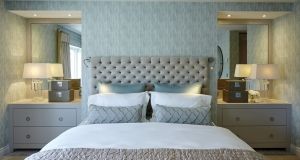 The main bedroom in a showhouse in the Ardilea Crescent scheme 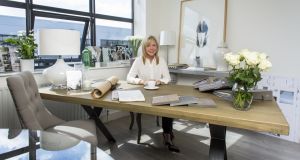 Arlene McIntyre of Ventura Design: the firm now employs about 20 staff including a design team of 10 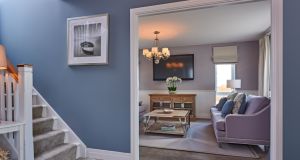 A livingroom in Marina Village 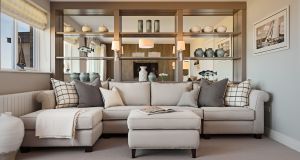 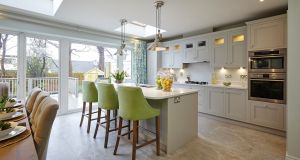 A Nolans kitchen in Ardilea Crescent

There’s no business like showhome business and Arlene McIntyre of Ventura Design is one of a small number of decorators who developers call in to turn their dream house ideas into a reality.

Selling new homes is selling dreams – the hope of a “happily ever after” life in brand new surroundings – so everything inside is fresh and optimistic. Developers entrust McIntyre and her to team to cast a desirable spell by combining kitchens, flooring and sittingroom interiors to make you want to sign on the dotted line and move.

If you have visited a new homes scheme recently, it’s likely you have walked through showhomes designed by McIntyre’s company, Ventura Design. Recent examples of her work include Garville Drive in Rathgar, Robswall in Malahide and Marina Village in Greystones.

A California woman born to Irish parents, McIntyre grew up in the sunny San Fernando Valley in the town of Sherman Oaks whose Ventura Boulevard inspired her company name.

When she was 18 the family moved back to Ireland because her father’s health was failing. McIntyre spent her 20s helping her mother nurse him while her contemporaries were out living life and having fun. It toughened her up, she says, and helped her grow up fast.

Her first job in the business was in a shop called Crate & Barrel in Dún Laoghaire. While there she started attending trade shows and fairs buying for the shop. It was on one such trip that PR Home, a UK-based company that was selling furniture and furnishings to the Conran shops and Heal’s, asked her to represent them in Ireland.

Jumping at the opportunity she started selling to architects and interior designers such as Peter Johnson and to premium stores such as Arnotts and Brown Thomas in Dublin, Cork and Limerick which all carried large furniture sections at the time.

Top of the range

However, her work there put her on the radar of other developments, including Ticknock Hill, which she did for Park Developments, Wyckham Point, where Jerry Haughey of Dorville Homes commissioned her to work with him on a joint venture between Dorville and O’Malley Construction of Galway. This led to jobs on Ardilea Crescent with O’Malley and on Terenure Square with Ballymore Homes.

As things ramped up towards the top of the market in the early 2000s budgets were very big and everything had to be top of the range.

“Developers wanted glossy kitchens and UFO-inspired blingy lighting,” McIntyre says. “And then the crash arrived and everything became very polarised. On the one hand, we were working with receivers, finishing blocks of apartments, 50 here, 20 there on an average of €8,000 per one-bedroom apartment. On the other, we had private clients who never saw a day of the recession. There was no one in between.”

While the firm now employs about 20 staff including a design team of 10, the “we” in Ventura Designs is McIntyre and her German husband Jürgen Riedel. He specialises in supplying developers with prefabricated bathroom “pods” that can simply be slotted, fully formed, into buildings through his company Bath Systems. Most recently he has worked with Kennedy Wilson on one of its new rental schemes.

McIntyre and Riedel merged their business skills and formed a company together in 2005. She affectionately calls him Angela Merkel and is real enough to admit that “of course” they talk business at home. “We try to solve problems together,” she says.

For the launch of the new Marina Village scheme in Greystones Ventura created 19 bespoke paint colours for Fleetwood to use in the scheme. These now form part of the paint company’s Prestige collection. Each showhome takes an average of 15 to 20 hours of design drafting time and up to 36 hours of physical labour to complete.

What’s interesting is that at this point showhomes only account for 30 per cent of the overall Ventura Design business; the rest of the work is generated by private clients.

With a head office and showroom (by appointment) already located at Ballycoolin in Dublin 15, Ventura is in expansion mode. A new design studio is also due to open in Deansgrange.

Getting the showhouse finish

Do deep pile: Buy really good quality carpets and ensure the carpet you order is the same thickness as the sample you viewed. Use really thick underlay for that deep-pile luxurious feeling underfoot.

Built-in wisdom: Built-in wardrobes, bedside tables and bathroom storage can be tailored to fit the scale and style of your home. Get a joiner, not a carpenter to do any built-in cabinetry. Show them references from Houzz, Pinterest and elsewhere to give them an idea of styles you like.

Kitchen confident: Do lots of research to determine the styles you like and then visit the kitchen company best suited to your style and budget. Bring photographs of the space and ask for 3D schematics to see how the kitchen being suggested will fit. Use gaffer tape to mask out on the floor the space this new design will occupy to see if it’s too big or too small for the room. Remember all kitchen showrooms have industrial-scale ceiling heights that are three times the average so a small showroom design might dwarf your smaller scale home.

Seating savvy: Have your sofa tailored to fit you especially if you’re smaller or taller than average. It can be customised to your back and leg length and will make it a place you want to spend time on, rather than a waste of floor space.

Go wild with colour: “It’s been 50 shades of grey for a long time and the recession seemed to fuel this but customers are finally ready to invest in blocks of colour – not just a lick of paint or some scatter cushions but colour on big ticket items, like an emerald green sofa,” McIntyre says. When choosing paint remember that north-facing rooms need warming up, so veer away from reds, oranges and purples in favour of golden tones. East-facing rooms can also be cold, so be careful with green tones. In south-facing rooms you can use richer tones as you have more light.