What it means to be seen: the importance of female tech role models

We spoke to the winners of the recent Women in Tech Awards, which celebrated the inspirational work of women in driving excellence, innovation and leadership in the tech industry 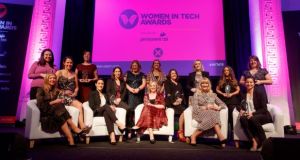 Winners of the Women in Tech Awards 2019, with Tracey Carney, Managing Director for Dublin Tech Summit

In 2018, spurred on by the obvious need to recognise and celebrate women in the Irish tech industry, Dublin Tech Summit launched the Women in Tech Awards. The Women in Tech Awards is crucially important to highlight the pioneers and leaders in an industry which is still heavily male-dominated. Role models are essential to encourage younger women and girls to consider careers in Science, Technology, Engineering and Mathematics, and to mentor those in the industry who need someone to look up to who has faced similar difficulties and issues.

Barbara McCarthy, chief technology officer (CTO) at Ding, was honoured with the special recognition Grace Hopper Award, named for the late pioneering American computer scientist and US Navy Rear Admiral. Ms McCarthy agrees that having access to female role models and mentors is crucial for inspiration and support. She says, “It feels like only yesterday that I was a new grad, not really knowing much but filled with enthusiasm about working in the tech industry. Fast forward to today and I have had the privilege to work with so many incredible people that have helped, coached, inspired, and propelled me along the way.”

Dr. Patricia Scanlon, founder, Soapbox Labs, and winner of the Trailblazer Award, sponsored by Oracle, echoes Ms McCarthy’s sentiments, adding, “I’ve received a lot of support, and worked through a lot of challenges. Scaling a business is hard work. Scaling a deep tech AI driven business is likely even harder. I strongly believe that you can’t be what you can’t see, so if I can help move the needle on women in tech and encourage, give back and inspire others then I am delighted to do that and this award gives me another opportunity.”

Lorna McAdoo of Version 1, winner of the IT Business Leader Award, sponsored by Magnet Networks, spoke of the importance of the Awards as a platform to shine a light on the achievements of women in the industry, saying, “As we move into a new decade women in tech need to take on more leading roles and encourage more women into tech. This event is crucial in showcasing the great female role models that we have and the great work that we are doing across Ireland. To have won the IT Business Leader at the Women in Tech Awards was such an honour and I hope will encourage everyone to take part and be a part of our success

The second year of the Women in Tech Awards saw the number of nominations triple from the inaugural Awards in 2018; 270 companies engaged with the Awards, with 368 women from all corners of the country nominated. In the spirit of being as inclusive and accessible as possible, the Awards ceremony itself was free to attend, thanks to a number of generous category sponsors and headline sponsor Permanent TSB. This created a wonderful opportunity for networking and Yemi Oluseun of Barclays, winner of the Digital Transformation Award sponsored by Travelport Digital, underlined how important meet-ups such as this are for women in the industry, stating, “It was incredible to meet so many inspirational women and see them celebrated.”

Paying due regard to the fact that mentoring is so critical to encourage people in their careers, an award category was dedicated to this. The Mentorship Award, sponsored by Fiserv, went to Jacinta Walker of Qualtrics, who spoke passionately about the subject matter, stating, “I think one of the most effective ways leaders in tech who care about gender parity can make a difference is through visibility of women and mentorship. Giving your time to sponsor, coach, mentor women shows your commitment to solving the gender balance issue in tech. The Women in Tech Awards is a great example of an organisation taking this to the next level and highlighting the achievements of so many fantastic women. I was honoured to receive the award on a topic I am so passionate about and it makes me excited to continue to support the event by nominating the amazing women in my network next year!”

Working towards gender balance is part of the wider diversity agenda, and Facebook were among those recognised for their efforts, taking the prize for HR Diversity Initiative, sponsored by PwC Ireland, while Accenture Ireland were awarded Diverse Company of the Year, sponsored by Permanent TSB.

Another highlight of the Awards was the Entrepreneur of the Year Award, sponsored by Enterprise Ireland, which went to Caroline Dunlea, of Core Optimisation. Ms Dunlea founded the digital marketing agency just four years ago and it is already recognised as being in the top five per cent of Google Partner agencies in Europe, Middle East and Africa (EMEA) region. She said; “I am very honoured to have received the Entrepreneur Award and it means so much to me as a business owner and also represents the dedication and commitment of an entire team’s drive for success.”