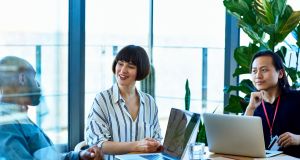 Advertising executives have had to adjust after expenditure has “fallen off a cliff” due to the uncertainty surrounding Covid-19. Photograph: Getty Images

Over the last six months, we’ve covered a broad range of topics from AI to video and lots in between. Every few weeks we step away from a specific topic and catch up with a leading industry figure to discuss the big industry trends. This week I caught up with Lara O’Reilly, senior correspondent at Digiday.

Based in London, O’Reilly is one of the highly talented Digiday writers. Her CV is an illustrious who’s who of business and marketing behemoths: she worked at Marketing Week, Business Insider and the Wall Street Journal before joining Digiday in 2019.

We did a specific Covid-19 podcast a few weeks ago, so this week was never intended to be another Covid special, but given that coronavirus dominates the global news agenda and the seismic impact it has on every sector it seemed strange to talk trends without any reference. Also, it is utterly timely: early predictions become quickly outdated as the drama continues to unfold in front of us in real-time, with real impact to business, society and public health.

We kicked off talking about Covid-19 and the general mood in the UK. O’Reilly summed up the sentiment in London, which seems to echo the mood in Ireland. “There’s a sense of malaise, at the start, given the magnitude of social disruption and rapid adjustment, people were running on adrenaline, but eight weeks into lockdown, with little end in sight, my sense is lots of people are on an adrenaline come-down at the moment,” she notes.

In this week's Inside Marketing podcast, Digiday senior correspondent Lara O'Reilly joins Dave virtually for an informative discussion on where brand thinking is during the pandemic as well as where it should be. Listen now:

O’Reilly points out that advertising expenditure has “fallen off a cliff” due to the uncertainty which paralyses consumer spending. It’s hard to know how severe an impact Covid-19 will have on advertising or any industry, but O’Reilly notes “advertising usually leads into a recession and lags out of it”.

Depending which columnist you read, the magnitude of the looming recession differs, but most are now bracing themselves for a worse situation than initially expected. In the early days of the crisis, the idea of a V-shaped recession and quick market rebound was popularly held. Artificially stifled consumer spending would create pent-up demand, because, unlike other recessions, consumers have cash and, unlike the last recession, banks have cash. The reality is that the longer uncertainty lingers and society sleeps, the longer recovery takes.

It may be echo chamber noise but there are hundreds of well-documented case studies of brands maintaining advertising spend and emerging stronger post-recession. O’Reilly mentions Cadbury which, “continued to spend millions on advertising campaigns instead of promotions and discounting during the last recession which, according to Cadbury, helped them regain share from their main competitor, who did the opposite”.

Lots of advertisers have understandably stopped spending. While maintaining spend during a recession may be financially prudent in the longer-term, the problem is, we’re not at recession stage yet. We’re in pandemic-management and life preservation, and recession is down the line. O’Reilly says, “there’s a touch of self-preservation as the industry talks about spending through a recession,” and that’s a big danger, as marketing can’t come across emotionally tone-deaf to a bigger issue.

O’Reilly says, “lots of companies aren’t advertising right now because they’re simply preserving whatever cash they have, taking measures to ensure they stay in business”. She argues that because there are certain industries where people cannot physically purchase right now and others that may have fulfilment issues, there’s little point in stimulating demand. “We’re now in month two of reactionary planning. The first stage was one of triage: what do we do next week or next month and then reassess, cash preservation was key”.

She says short-term focus on sales and business preservation was inevitable, meaning marketing spend would at least pause. O’Reilly acknowledges the longer-term benefit of advertising, brands could advertise now to “build up purchase intent for a time when normality resumes,” but she accepts the new reality. “Most companies took a massive sales hit so a recalibration of advertising budgets is unfortunately necessary.”

Availability of relevant creative also influences whether brands should go heavy or dark now. O’Reilly says brands need to ask: “Is my ad that was appropriate last year, still relevant – or is it too jarring for the situation in the outside world today?”. She also highlights the potential pitfalls around pseudo-purpose marketing.

Brands that were criticised for marketing opportunism, reimagining logos to promote social distancing, for example, may have forgotten that, “the most important thing to do in the early stages was to do right by your people, your employees.”

“People will remember brands that tried to profit at these times, that didn’t behave responsibly, but they’ll also remember companies that pivoted quickly to be helpful, to use production capacity to make PPE or hand sanitiser, particularly those that didn’t create campaigns promoting the fact that they were doing so.”

Creative messaging has transitioned between phases too. Phase one was the early and confusing residual phase where many clients just kept current campaigns running as normal. I’m not criticising, but it felt strange hearing car manufacturers advertise warranties at a time when media was reporting thousands of global deaths.

Phase two saw more utility-based holding campaigns, quickly produced ads informing us of practical measures companies were deploying for public safety. Now, as we realise the light is more distant in the tunnel, we enter phase three. Campaigns are more polished, more emotive. We’re in the melancholic, empty landmark, epic drone shot, “insert-brand-here” thank you campaign phase. O’Reilly says, “while the sentiment is correct, they all look, sound and feel the same”.

Shifting gears, we moved to arguably the biggest issue facing our pre-Covid industry: Google’s death-notice on use of third-party cookies, effective from January 2022. Not being an industry to miss an opportunity, some have asked Google to delay the inevitable, but O’Reilly says this may be nothing more than wishful thinking, and they intend to continue as planned. She believes, “Google will still win, with the absence of third-party cookies in Chrome, one alternative is for advertisers to use Google’s data,” and, “although it is working with the industry, Google will be the arbiter of viable alternatives and what goes by the wayside”.

While it may be good for Google, O’Reilly feels cookie-blocking isn’t necessarily bad for publishers as they could unlock more value from audiences with a return to context. “Audience-based buying denigrated context, the only thing that mattered was the impression, it didn’t matter where you got it. It became the status quo, how the world worked    .

When the change comes “publishers with loyal subscribers will do well, we’ll see more direct deals between agencies and publishers, or publisher groups”.

The impact of a crumbled cookie may see the agency relationship strengthen, “the agency positions itself as being there to solve complicated problems for clients,” and O’Reilly sees this as an opportunity to step up and offer more consultative services helping clients navigate this new complexity. But she says it’s more difficult for brands as, “they’ve worked off this cookie-based model for a while, all the work done to build databases and targeting strategies will ultimately have to change,” adding that, “measurement and attribution will become increasingly tricky”.

Digiday is one of the leading B2B advertising and ad tech publishers with brilliantly written articles and insights from leading industry experts. The weekly podcast, hosted by Brian Morrissey, is also well worth tuning into. You can find more information about Digiday and upcoming events at digiday.com.