The high cost of putting children through third level education is resulting in significant financial strain for Irish families, leaving 50 per cent of parents in debt, according to research published by Zurich Life Assurance 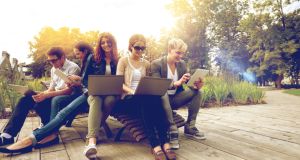 The Cost of College Education Calculator will help parents to work out the estimated costs of sending their children to college. Photograph: Shutterstock

Zurich’s Cost of Education in Ireland research has found that 81 per cent of Irish parents find covering the cost of third level education a financial burden, with a similar number, 78 per cent, feeling that third level establishments don’t do enough to help parents keep costs down.

While 49 per cent of parents rely on savings to pay for their children’s third level education, 50 per cent rely on loans and other borrowings to meet the costs.

The single biggest cost for parents is accommodation with 45 per cent of Irish children living away from home during their college years. In 2018, there has been a dramatic increase in the average spend for student accommodation from €2,628 to €3,442, but the biggest increases is in the rental sector where students can expect to pay up to and over €4,000 on rent during the academic year.

Third level fees were identified as another significant expense to parents with the average student placement costing €2,419.

The research also revealed that 78 per cent of parents support their children financially outside of rent, transport and college fees, spending an additional €2,172 a year on average.

Understanding the financial strain that parents can be put under to cover the cost of their children’s third level education, Zurich has developed a helpful tool. The Cost of College Education Calculator will help parents to work out the estimated costs of sending their children to college and will show them how much they might need to save each month to meet these costs.

“The findings of this year’s research show that the cost of education is significantly higher than parents expect and more than ever families are taking on debt to finance their children’s schooling,” says Jonathan Daly, head of retail distribution and propositions at Zurich Life. “It is unsustainable for families to rely on borrowing to fund their children’s future and the most effective solution against this is rigorous early financial planning,” he adds.

“Early and consistent saving is the best way to prepare for covering your child’s education costs. Opening a savings account when children are under a year old will allow you to prioritise education costs before they become a significant financial burden.”

Looking specifically at parents’ saving behaviour, the research found that 72 per cent of parents have a savings account and save an average of €5,273 per year. Half of those savers say their top saving priority is to cover children’s education costs.

A great education is the best possible start in life and for most parents ensuring they can provide for their children's education, from primary school right through to third level, is crucial. Zurich understands that while education in Ireland is said to be free, this is never the reality and costs are rising per child.

It's clear that the cost of college education is high and increases over the years. So, wouldn't it make sense to plan ahead and build up your savings year-on-year?

With a Zurich Easy Access Savings plan you can gradually build up the funds necessary to support your children's education.