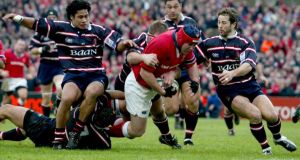 Munster’s Anthony Foley dives for the line ahead of several Gloucester players in 2003. Photograph: Morgan Treacy/Inpho

If this is to be the Heineken’s final bow, then the old lady is going out in style. Week one was compelling from its Ulster start to the final bows at Exeter and Toulon. And this weekend? Saracens v Toulouse at Wembley last night, Ospreys at Northampton tomorrow and, sandwiched in between, poor Cardiff, still suffering from their Exeter bruising, have Toulon coming down the tracks. And there’s Thomond.

Of all the Heineken grounds, Thomond Park has seen more than its share of big European games, so once the English and French handed in their notice more than 18 months ago it was a fair bet that at least one more was on the cards. Then when the pools were announced with Munster alongside Gloucester, as well as Edinburgh and Perpignan, it became inevitable that old wounds would be reopened.

Put simply, the only time I or a team I was involved with escaped Thomond Park unscathed was when I was part of the Sky commentary team and even then it had its moments, Ronan O’Gara stealing the game from under Northampton noses with an injury-time drop-kick after 40-plus phases.

But if that win was typical of Munster cussedness it was at the “new” Thomond, an elegant and modern stadium that holds 26,600 and goes in for exhibitions, conferences, corporate banqueting and even weddings, as well as fashion shows. More potent memories are of old Thomond, the concrete bowl in east Limerick which officially held 12,500, though on big-game nights – and the big games always tend to be at night in Limerick – it felt as if closer on 20,000 had squeezed in or come over the walls.

Needed to win
And the rawest of those memories is, of course, 2003 and the so-called Miracle Match, when Munster needed to beat Gloucester by four tries and 27 points and did it, O’Gara – that name keeps cropping up – converting John Kelly’s second try with a minute – some say less – on the clock.

Everyone remembers it and when lists are compiled it’s never out of those top-10 Heineken moments and is frequently at the top.

However, at the distance of a decade, it’s worth examining the background. That season Gloucester topped the league, leading Wasps by 18 points and, after beating Munster comfortably enough at Kingsholm, Nigel Melville and I believed we had built a side that was about to become a force in Europe.

In fact if things had gone as well off the field, that might have happened. Instead 2003 is remembered for Thomond, the Miracle Match and a fairly humbling performance from a team that was unhinged by the experience. How else do you explain turning a 35–16 win into a 33–6 defeat?

There were tales whizzing around Limerick that we’d left the team’s game plan in a taxi and that it had fallen into Munster hands, which is half true except that no taxi was involved and what was left on a hotel copier wasn’t the game plan. No matter. It helped to add more impetus to a ball that was already rolling.

Our first visit was on the Friday and the ground hadn’t changed one jot from when I played there in 1988. Kids were on the walls telling us that we were going to get our backsides kicked, but there was no real hint of what was to face us as we ran out to a packed ground dressed top to toe in red, most of the fans waving Munster flags and red flares going off all over the place.

Wall of sound
I’ve never come across a wall of sound like it. Stoked by replay after replay of The Fields of Athenry and Stand Up and Fight – some live, some taped, all at a million decibels – it was a greeting and a warning like no other, and guys who had played at the highest levels failed to cope.

How else do you explain turning down a penalty in front of the posts – a match-winning kick – with 10 minutes to go? A solid pro missed a touchline tackle and two more were sin-binned.

At half-time we tried to find something that would anchor our game, but couldn’t. The physicality of Jim Williams, Anthony Foley and Alan Quinlan in the backrow was only matched by Munster’s set-piece superiority.

Azam and Pete Buxton spent 10 minutes in the sin-bin and all the while O’Gara prodded and teased until that final move when Munster went from under their owns posts to Kelly scoring halfway out on the right.

This time? Well a lot will depend on the side Gloucester select, but O’Gara is no longer around to get Munster out of the hole they dug by losing to Edinburgh and if the Northampton experience suggested anything, it’s that Thomond is not quite the intimidating pile it once was.

Nonetheless tomorrow we’ll find what new Thomond, new Munster and a handful of England prospects have to offer.

2 North’s status under Belfast Agreement is an inconvenient truth

4 The Irish Times view on the opinion poll: public doubts on Covid-19 strategy

5 Diarmaid Ferriter: We are being infantilised on Covid-19 by an immature Government