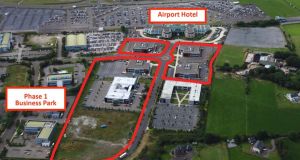 In what is likely to be one of the most important sales this year of an office investment outside Dublin, five detached and fully occupied office blocks are going on the market today at Cork Airport Business Park.

Joint agents DTZ Sherry FitzGerald and Lisney are seeking in excess of €13 million for the third-generation buildings which are producing rents of €1,639,449. New owners will get a highly attractive yield of just over 12 per cent.

The sale is expected to be of interest to many of the investment groups who have been bidding without success for office investments in the Dublin area.

The attractions of the Cork investment includes the location beside the new airport terminal, the high quality fit-out of the five buildings and the fact that the selling price – €110 per sq ft (€1,184 per sq m) – is somewhat below replacement costs of around €140 per sq ft (€1,506 per sq m).

The office blocks form part of the second phase of the business park which was developed between 2005 and 2009 by Brooklyn Properties, a consortium which included the Dublin Airport Authority, Bank of Scotland Ireland and builder Bernard McNamara. Three of the two-storey blocks are fairly similar with floor areas of 2,043sq m (22,000sq ft), a fourth building extends to 3,808sq m (41,000 sq ft) and a fifth building has 1,207sq m (13,000sq ft).

The agents are quoting €500,000 for an adjoining site of 1.2 hectares (3 acres) which will inevitably be used for further office blocks to be located between the Bank of New York Mellon and the Amazon European headquarters.

Edward Hanafin of Lisney said the sale was a “unique opportunity to acquire a significant investment with a strong mix of tenants”, while Peter O’Flynn of DTZ suggested it was the “strongest investment to be brought to the market in Cork in the past four year”.

Amazon is easily the main tenant, occupying the largest building since 2006 and one of the 2,043sq m blocks since 2012. The company is paying in excess of €900,000 per annum for the two buildings. However the lease terms, and whether or not they include the now standard break options, have not been disclosed.

The American Red Hat software company is the main tenant in Block 23, while the American global healthcare company GlaxoSmith|Kline and the US semi-conductor company Hittite share Block 22. The other tenants include Vertex and the National Cancer Registry Board. The selling agents were not in a position to release the lease terms for any of the tenants. Rents generally average around €150 per sq m (€14 per sq ft).

The Cork Airport Business Park has proven a popular office location with over 500,000sq ft of office space completed and let since its launch in the late 1990s. The success of the second phase in attracting companies in the foreign direct investment sector has meant that the park is now one of the largest employment centres in the south of Ireland.

The park adjoins the four-star Cork Airport Hotel which has 145 bedrooms and a conference centre. It is about 6km from Cork city centre.