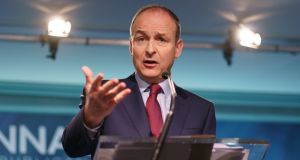 Taoiseach Micheál Martin: has hinted at preparation for a Border poll in five years or so. Photograph: Fran Veale

Here’s the biggest problem for Sinn Féin and for civic nationalism in Northern Ireland: no matter how many conferences or unity projects or reports or statements it may organise or issue on the subject, the final decision on a Border poll still rests with the British secretary of state. Indeed, the 1998 Belfast Agreement is very specific:

“The secretary of state may by order direct the holding of a poll for the purposes of section 1 on a date specified in the order . . . [and] . . . shall exercise the power . . . if at any time it appears likely to him that a majority of those voting would express a wish that Northern Ireland should cease to be part of the United Kingdom and form part of a united Ireland.”

The problem is that there is nothing in the agreement defining “likely” or setting out the evidence and circumstances by which a secretary of state (and there have been 12 since 1998) might conclude that a majority for a united Ireland is likely. For example, right now the Assembly doesn’t contain a majority of unionists; unionists don’t return a majority of MPs to Westminster; and a slim majority of the 462 local councillors in NI are non-unionist. Given those figures couldn’t it reasonably be concluded there would be a likelihood (certainly a possibility) of unionists not winning a Border poll?

What evidence would convince a secretary of state? SF as the largest party in the Assembly, a SF first minister and a further decline in unionist numbers in the Assembly? A series of opinion polls suggesting the pro-union vote is hovering at or just above 50 per cent? A majority vote in the Assembly asking for a Border poll? The leaders of the non-unionist parties (with a collective vote greater than the unionist vote) asking for a poll?

Unionists take considerable comfort from the vagueness of the agreement; their key figures dismissing calls for a poll with a variation on “the conditions under which a poll can be called haven’t been met”. Yet there only is one condition: if the secretary of state thinks a united Ireland outcome is likely. But what happens if he wakes up one morning and decides it is likely? What happens if he decides to put a bit of pressure on troublesome unionism and threatens it with a poll? Vagueness is always a two-edged sword. And, as we know from serial crises with the peace process, constructive ambiguity (a fancy-pants term for vagueness) is a particularly destructive element of any agreement.

Vagueness is always a two-edged sword

Since the Brexit result in 2016 (one of those occasional “England’s misfortune is Ireland’s opportunity” moments), SF in particular and a regenerated civic nationalism in general has been pushing the secretary of state to define “likely”. Colin Harvey, professor of human rights law at Queen’s University Belfast, wrote to Brandon Lewis on January 19th : “ . . . Could you provide details of . . . reasonable factors and the objective, reliable and empirical information you use to determine whether it appears likely . . . a majority of those voting would express a wish that Northern Ireland should cease to be part of the United Kingdom and form part of a united Ireland . . . and could you also explain how you keep this assessment under review and what discussions you intend to hold with the Irish Government?”

Lewis will be reluctant to provide this information. Partly because he doesn’t want SF to know; and partly because he doesn’t want to spook elements of unionism, who would claim he was simply making life easier for those pushing for a Border poll. But I’m not sure how much longer he (although it is, of course, the British government) can withhold the information. There is a building consensus that a Border poll is coming (a Sunday Times poll on January 24th suggested a slim majority in NI supported one) and a recent speech by Taoiseach Micheál Martin – in which he introduced the shared island dialogues – also hinted at preparation for a poll in five years or so.

The Irish Government has skin in the game, obviously, because any poll in NI would have to be accompanied by one in the Republic. That being the case, I would be very surprised if Martin wasn’t already aware of the definition of “likely”; but I’d also be surprised if he wants it put in the public domain too soon. Neither government has any interest in allowing SF sight of that particular road map.

That said, the question isn’t going to go away. The NI protocol (the constitutional granny-flat status and the tensions it has created) and the possibility of Scotland leaving the UK (a huge result for the Scottish National Party in the elections due in May could force Boris Johnson’s hand on a second referendum) will ensure the question remains to the fore. The results of the next Assembly election (due in spring 2022) will have a bearing. As will the outworkings of Brexit over the next couple of years.

It seems likely to me the British government, as it has done so often before, will buckle under pressure and set out the definition of “likely” sooner rather than later. In one sense it will make little difference to SF, which has been preparing for the poll for years. Ironically, though, the information, provided early, could actually be of benefit to unionism. Surely it’s better to know what could trigger a poll – and get busy with the necessary policy/strategy preparation – than suddenly being bounced into one? Unless being bounced into one is the preferred option of the British government. I wouldn’t put anything past Johnson.

2 Diarmaid Ferriter: We are being infantilised on Covid-19 by an immature Government

3 Jennifer O’Connell: The Government doesn’t trust us and it’s mutual