Black Irish Lives: The singer Loah on ways for the arts world to overcome its prejudices 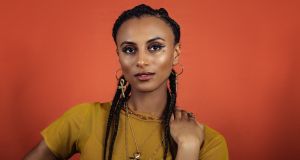 Sallay Garnett, aka the singer Loah, says to maintain the momentum of the recent anti-racist movement in Ireland, there needs to be diversity in all areas of society. Photograph: Abe Neihum

What next? A question I have grappled with every single day, since the first harrowing moment I watched (and stopped halfway through) the video of George Floyd’s death at the hands of police officers in the US in May.

The ensuing weeks have brought a deluge of Black Lives Matter protests across the United States, and indeed the world, as compassion and outrage for the continued struggle of African-Americans have awakened minorities and allies everywhere.

Toppled statues, mass protests – the feeling is that this has the potential to be the greatest mass awakening since the civil-rights movement of the 1950s and 1960s. I would argue the Covid-19 pandemic has been the factor that made this facing of the facts (and hard facts they are) possible, as much of the world is encased at home consuming social media, unable to look away from what has been bubbling for centuries. We have reached our consensus: we want to end racism. But how?

If arts organisations in Ireland want to embrace multiculturalism, they just need to give their platforms to black and brown artists and collectives

In Ireland, many people of colour and black folks, myself included, have been taking to social media to discuss from a personal perspective the experiences of racism. We are being called to reckon with the truth that although we give ourselves the title of the Land of a Thousand Welcomes, the direct provision system and our treatment of refugees is often riddled with injustices, because our own feelings about refugees are filled with contrast.

Kathleen Sherlock, in her recent Irish Times opinion piece, pointed out that the Traveller community faces health, education and employment outcomes not dissimilar to those of some of the most disenfranchised African-American populations. To remain in denial of our own issues at home would be to remain hypocritical.

A task this monumental has to be undertaken in every sector, with a cohesive approach. If we wish to move away from structural and habitual racism, what are we moving towards? If it is a highly functional, multicultural, pluralist society that both preserves its traditions and has inclusivity and understanding at its core, then surely we must create the answers from this place of inclusivity, by involving everyone in the solution.

I am a musician, so my focus falls on the question of the arts.

Robert Farhat, one of the founders of Irish music company Ensemble Music, now works in London as a concert programmer and artist mentor at Serious music and the London Jazz Festival. He believes we cannot expect anyone other than minority groups themselves to truly understand the needs of the group and therefore to lead change and inclusivity. Farhat says: “If arts organisations in Ireland want to embrace multiculturalism, they just need to give their platforms to black and brown artists and collectives.”

White men and women do not have the inherent knowledge to be able to programme minority art in an authentic and genuine way, he says. Nor should they; they don’t have the lived experience. “For me, embracing multiculturalism in the arts isn’t just about programming the one black artist you know, taking credit for it and then job done,” Farhat adds. “You give the platform and step aside.”

The more diverse your staff, the greater the accumulated knowledge. That’s not just people working directly with artists but booking agents and managerial roles

My sister Emma Garnett – stage name Fehdah – is also a singer (as well as a music producer and composer, and experimental physics demonstrator at Maynooth University). She notes that in the arts, Irish audiences are already consuming the work of minorities, but without the appropriate context or the necessary inclusiveness of multiculturalism.

“There needs to be wider acknowledgment of how much we’re influenced by America here in so many of the arts – and that means black America. When you make American music, it’s very easy to forget where American music really comes from, because it’s not represented properly in visual forms of their media. Recognise black America’s influence in all the music we make,” she says.

With that understanding, “you then diversify your staff. The more diverse, the greater the accumulated knowledge. That’s not just people working directly with artists but booking agents and managerial roles.”

Farhat agrees, adding that “hiring and engagement can take time, but the part that is the quickest step is to just give the platforms to black and brown artists and the people supporting them. It’s all so new [in Ireland], that gatekeepers don’t have the knowledge. That’s fine – just admit that, give the spaces, and then step away. It’s pretty simple.”

The Arts Council’s equality, human rights and diversity policy and strategy aims to do just this within the context of its own body: how it hires and how it grants awards. The three-year action plan – currently in progress – aims to put into action the “belief that a diverse organisation is a more dynamic and effective organisation” and, in doing so, “undertakes as a State agency to become more representative of the population in Ireland today”. Initiatives like these are excellent places to start for every organisation or company working in the arts.

If we’re trying to undo a system built with very crass decision-making, then we’re going to have to make big decisions and accept that’s how you topple a broken empire

But to maintain the momentum of the recent anti-racist movement in Ireland, there needs to be diversity in all areas of society. Garnett says it will take the predominantly white establishment too long “to learn what needs to be learned to actually make the changes effectively... They need to be able to make these decisions with black people and people of colour. Implement diversity with the same fervour and the same organisation as racism was institutionalised.”

Perhaps this is the salient point – that in so many places, racism has been a long-standing “concerted effort from western imperial governments”, she says. “They had to organise to make it happen, write it into laws, exclude people specifically.”

We are no strangers to this kind of structural targeting in Ireland. “We now need to specifically include people just the way we have specifically, if unconsciously, excluded them. It might seem crass, but if we’re trying to undo a system that was built with very crass decision-making, then we’re going to have to make big decisions and accept that that’s how you topple down a broken empire.”

The toppling of the statues is just the beginning.