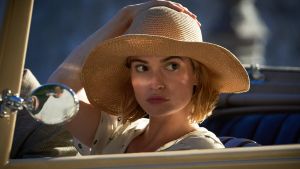 There is at least one promising moment (briefly reprised) in Ben Wheatley’s unengaging disinterment of Daphne du Maurier’s most durable melodrama. As Maxim de Winter (Armie Hammer) and his new wife (Lily James) are driving towards Manderley — about which you may have dreamt last night – Pentangle’s version of Let No Man Steal Your Thyme surges onto the soundtrack.

That is not how things work out. Commentators on this Netflix production have described it as a “remake” of the famous Alfred Hitchcock version from 1940. I suppose you could call it that. But the du Maurier novel, healthily in print for 80 years, has generated any number of successful adaptations (Diana Rigg won an Emmy for her Mrs Danvers in a 1996 TV version). So it is no more unreasonable to have another crack at the thing than it is to wrestle once again with Wuthering Heights.

It would, however, be as well to identify some sort of original angle. The screenplay by Jane Goldman, Joe Shrapnel and Anna Waterhouse doesn’t have a single new idea in its head. You know what happens. While assisting a snobbish old lady in Monte Carlo, the unnamed heroine – later “The Second Mrs de Winter” – falls for a grumpy widower and gets lured to his Cornish mansion. The eponymous Rebecca, Max’s late first wife, still looms over the pile.

Nobody is quite so inconsolable as the sinister, sexually ambiguous housekeeper Mrs Danvers. The stage actress Judith Anderson gave her greatest film performance in the role for Hitchcock. Kristin Scott Thomas feels like inevitable casting in 2020.

Over the years, the feminist, postmodern, Marxist and proto-structuralist readings of this popular text have built up. It could hardly be better suited to an era so focused on the concept of “toxic masculinity”. It seems at first – though this might not quite be so – that de Winter, like too many spoilt men, prefers a non-existent ideal woman to one with whom he has to actually communicate. That notion is still buried in there. But the picture is so lathered in superficial gloss the subtexts struggle to breathe.

Working in more CGI than your average Star Wars film, Wheatley begins, for the Riviera scenes, in vintage tourism-poster yellow. The shift from that to country-house gloom is so stark the unprepared viewer is liable to suffer whiplash. We are essentially dealing with the Poirot aesthetic in both worlds. Everything is very much in its place. The forests are arranged as neatly as the drawing rooms.

The film might still have taken off if a little more electricity sparked between the leads. We are constantly told that Maxim has an appalling temper, but, more eager to be liked than Laurence Olivier in the Hitchcock film, knitting-pattern model Hammer rarely manages anything more fearsome than a low growl. James does a little better with her role, but nobody ever walked out of Rebecca whistling “The Second Mrs de Winter”.

What of KST? It feels as if everyone involved is so happy with Dame Kristin’s casting they haven’t bothered to encourage any novel intonations or original postures. Whereas Anderson bristled with repressed sexuality, KST comes across as an angry lady waiting for a long-delayed tram.

It doesn’t help that Wheatley and company have singularly failed to keep the malign spirit of Rebecca de Winter alive. In the best versions of this story (including one by A H**chcock) the dead woman inhabits Manderley more prominently than any of the living characters. She is there in the architecture, the weather, the wall decorations and the shadows behind Mrs Danvers’ demented stare. In Wheatley’s version she may as well be at the bottom of the sea.

Streaming on Netflix from October 21st