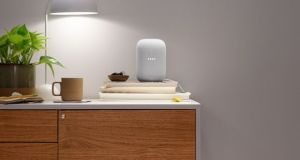 Google has tie-ins with a host of smart home devices

It has been a busy few weeks for Google. Not only did the company announce a brand new Chromecast, but it also released the Pixel 5, the 5G version of its Pixel 4a and the Nest Audio.

The last is the latest addition to Google’s smart speakers. It replaces the Google Home with an altogether better – and bigger – speaker for playing your music, podcasts or Duo phone calls.

The new Nest Audio looks as different from the original Google Home as you can get. It’s bigger but still compact. Taking some style cues from the Google Nest Mini, the new speaker is predominantly cloth covered, with charcoal and chalk the two options available. They’re suitably subtle and will fit in with almost any decor.

It is buttonless, too, relying on touch controls to raise and lower volume and to pause. Volume is controlled by tapping the left and right corner, while a tap will pause or play for audio. You could, of course, ask Google to do it; that is what the speaker is for, after all, communicating with your Google Assistant. Ask Google Assistant to raise or lower the volume rather than having to stretch over to do it yourself, making the Nest Audio the perfect device for maximising lounging time.

That’s not all it does. Google has tie-ins with a host of smart home devices; some are its own Nest devices, such as the Hello doorbell and the smart thermostat, but several third-party smart home providers have made their products work with Google.

That means you can ask the assistant to arm and disarm your alarm, for example, or to turn off plugs or lights with voice commands. If you haven’t started down the smart home rabbit hole, this won’t mean much, but the convenience of being able to control some of the basic functions of your home while you are away or – even better – automating it so your home manages itself is something you can get used to quite quickly.

Google has bumped up the speaker side of things, but still retained the smart elements. The Nest Audio won’t defeat high-end audio speakers in terms of sound, but it is a leap ahead of the original Google Home on quality. Vocals are crisp, music sounds great: for most people, this will be the perfect speaker to have in the kitchen or a home office.

The Nest Audio has a 75mm woofer and 19mm tweeter, with three far-field microphones. It also uses some of the technology seen in the Nest Mini, such as Ambient IQ, which detects the background noise and makes the Google Assistant louder to compensate.

The good
The sound quality on the Nest Audio is streets ahead of the original Google Home. This feels more like a speaker that has some smarts, rather than a digital assistant with a speaker tacked on. You can have two speakers working together to provide stereo sound.

The not so good
If you are looking for perfect sound, you may find the Nest Audio doesn’t quite rival that expensive Bluetooth speaker you bought last year. But it costs a third of the price. Plus it has your Google Assistant built in so, as far as smart speakers go, this is one of the best sounding out there. And for €100, it is certainly a good buy.

The rest
You can buy the Nest Audio in charcoal and chalk in Ireland; if you want any fancier colours, you’re out of luck. Still, it means the speaker will fit in with most home decor, making it a versatile choice. If you don’t want Nest Audio listening in on everything you do, you can mute the microphone with a hardware switch at the back.

The verdict
Google has noticeably improved its smart speaker, making it the best sounding one we’ve come across yet.