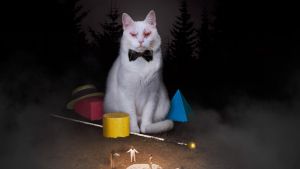 Rabbits have lately occupied several unsettling cinematic landscapes, including Jordan Peele’s Us and Yorgos Lanthimos’s The Favourite. But these other bunnies have nothing on this Swedish-Danish metaphysical rabbithole, which comes replete with shadow rabbits.

Imagine the most grotesque figures from The League of Gentlemen transported to Michael Haneke’s Funny Games and you’ll have some sense of the creeping dread that comes with Johannes Nyholm’s unforgettable woodland reverie. Even the nursery-rhyme-derived title carries something of the surrealist Euro-folk horror of Valerie and Her Week of Wonders.

A couple, Tobias (Leif Edlund) and Elin (Ylva Gallon), with serious issues that manifest as squabbles about ice-cream, head into the woods and pitch a tent. There they are beset by a bizarre circus troupe, including a white-suited, underpants-obsessed ringmaster (Peter Belli, terrifying), a tall girl (Katarina Jakobson), a giant (Morad Baloo Khatchadorian), and two dogs: one alive and one dead.

Once Tobias and Elin have been “attended to”, Tobias Höiem-Flyckt and Johan Lundborg’s camera hovers godlike over the slapstick sadists as the victims are transported back to their tent or sometimes their car, where they must endure their torture and deaths anew.

Tobias can recall earlier episodes and seeks an escape. That may not be enough to free the unfortunate couple from their repeated grisly fates.

Temporal looping has never been so discombobulating. Nyholm’s script cleverly incorporates grief without overworking its allegorical aspects. Simon Ohlsson and Olof Cornéer’s score is unceasingly creepy. The production design – from the rooster shadow-play to the decorated music box – is glorious. Belli’s straw-hatted villain singing Yummy, Yummy, Yummy as he orders a dog to do something inappropriate will haunt your dreams.

On BFI Player from September 7th