Black Irish Lives: Gaeilgeoir and broadcaster Ola Majekodunmi on the future of the language 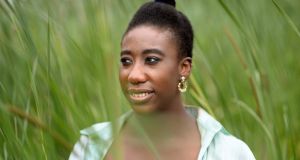 The Irish language is evolving, as are the people who use it.  There are Irish speakers around the globe treasuring the language, keeping it alive, and the language has started to drift away from its historical ties to religion.

Instead of the traditional greeting of Dia is Mhuire dhuit (which translates as God and Mary be with you), now people usually say “haigh”, which is the much simpler “hi”. We now have a Fóclóir Aiteach, which is an Irish-English LGBTQ dictionary. There is the hugely popular Motherfoclóir podcast, which discusses fun, new and exciting terms as Gaeilge. There are an increasing number of interesting Irish-language events and campaigns, such as Gaeltacht University College Dublin’s upcoming discussion, Irish language in the Global Context.

But it can seem unusual for me to discuss the Irish language: my Nigerian heritage makes me different from the usual Irish speaker. Some people are surprised to hear me speak about a topic that is not common among my community. Yes, Irish is not my mother tongue, and for that reason I sometimes feel I should remove myself from the conversation. There were times when I questioned if Irish is a language for me.

My parents took a risk in putting me in an Irish-language school, as we didn’t know how I would be received, but it was a risk that paid off

I have even questioned lately if I am a Gael or just a learnt-Irish speaker, or whether I should continue referring to myself as duine dubh or duine le dath instead of duine gorm – which is the recognised term to refer to “black people”. But I remain deeply passionate about the language, and I admire its growth.

There are people who assume that black people who embrace and take part in Irish culture are trying “too hard” and are looking to assimilate. My reasoning for speaking Irish is not to assimilate. I have not abandoned my own cultural background – another assumption people sometimes make.

Since moving here in 1997, it was clear that immigrant life and being a black African in Ireland was going to have its challenges, so learning Irish proved to be a way into an adventure that might help my future. I started primary school in 2000, a peak time of inward migration into Ireland, and it was almost unheard of for a child from an immigrant background to go to an all-Irish school.

I feel my parents took a risk in putting me in an Irish-language school, as we didn’t know how I would be received, but it was a risk that paid off – I am now in my 20s and an Irish-language broadcaster. I cannot imagine my life now without Irish, and my mother often mentions that I was relaxed and happy on my first day of school.

A question I often get asked is “Why did you go to all-Irish schools?” My response in my head is “why not?” Gaelscoileanna offer a great education, and demand is high for places all around the country. Why shouldn’t people like me be a part of that? Why shouldn’t we embrace this beautiful language?

An initiative called Imeasc was set up in 2005 to campaign and help immigrant children feel welcome in gaelscoileanna at a time when there was growing anti-immigrant rhetoric suggesting these children would have a negative effect on the longevity of the language. Growing up, I found that some people felt threatened or jealous that I spoke fluent Irish. This has always made me feel uneasy, a feeling shared by some other black people.

Seeing the surprise on Irish speakers’ faces when I make them aware of my fluency, and the connection we can then make, feels wonderful

In an Instagram video posted by the journalist Fionnuala Moran, for the #ShareTheMic campaign, which helped bring stories of racism towards the black-Irish community into the spotlight, one African-Irish woman spoke about how she felt black people were not always welcomed to learn Irish. She said that at age 10, she felt ostracised by her primary school teacher in Co Offaly who would not teach her Irish.

On an international scale, there was some hostility earlier this year directed towards Irish dancer and black American woman Morgan Bullock, whose performance of traditional Irish dance steps to R&B music went viral online, receiving more than 750,000 views. While many loved her mix of two cultures, others accused her of cultural appropriation. But was the real issue her own identity as a black woman, or her embrace and adaptation of Irish culture?

I do not want to be “the black girl who speaks Irish”. I am just a black woman who happens to speak Irish. Seeing the surprise on Irish speakers’ faces when I make them aware of my fluency, and the connection we can then make, feels wonderful. It is moments like this with young, diverse people that will help breathe life and celebration into the Irish language and culture.

I am very aware that what I do is unusual, but that is slowly changing. Increasing numbers of Irish people of colour speak Irish, and it is heart-warming knowing you are not alone in this minority.

The faces of our gaelscoileanna are also slowly changing, becoming a bit more diverse. This is one reason I jumped at the chance to launch my new radio show, Afra-Éire, on Raidió na Life 106.4FM in January; it features different music from the African continent as well as songs from African-Irish artists.

The Ireland I grew up in is different from the Ireland of today. We are now awake, and I hope we continue to be, so we cherish who we now are and who we might become.