Uncorked: Comforting balm for the most difficult times 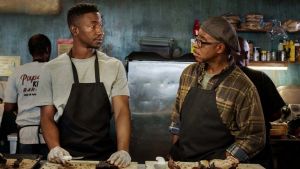 Clunky lines and obvious plot turns are aplenty in Uncorked

Someone who knows more about oenology than me (almost certainly you), will have to settle upon the perfect wine to sum up this utterly harmless — can we damn with fainter praise? — drama from the warmer corner of Netflix. The sweet bouquet is undercut by no robust traces of tannin. The “finish” is exactly what you expect. No sour (or sweet for that matter) aftertaste lingers upon the palate. Knock yourself out with the comparisons to something with a screw-top that retails around €7.99.

You have to admire the shameless familiarity of the plot. An African-American fellow betrays his slightly stern father — owner of a barbeque restaurant — to become … what? A ballet dancer in County Durham? A jazz drummer in New York City? No, smart, good-looking Elijah (Mamoudou Athie) wants to train as a sommelier for high-end restaurants. Someone at the dinner table asks if he’s going to become an African. “No, that’s ‘Somalian’,” he replies. If you think that writing is broad then you’ll want to put fingers in ears when Elijah talks us through his favourite grape varieties. Apparently, “Chardonnay is the Jay-Z.” Pinot Grigio is Kanye West. Riesling is Drake. He doesn’t get on to which strain most suggests Ol’ Dirty Bastard. I’m betting Gewürztraminer.

Yet for all those clunky lines and obvious plot turns, Uncorked — oh, did I mention the title? — offers comforting balm for the most difficult times. Once you get used the lolloping rhythms, its sheer predictability becomes positively comforting. Like Whiplash, it sees itself as a combination of sports movie and animated Wikipedia entry. As we head towards one final showdown with the exam board and prepare for Rocky 1 or Rocky 2 (no spoilers, it can be only one or other), we savour the economic explanations of tasting procedures and flavour dynamics. Prentice Penny directs her own script with verve. Mamoudou Athie, who’s been knocking on the door for a few years, is good enough to suggest that he’ll be unavoidable in a year or two.

One more thing. Fair play to everyone for constructing a competitive drama without a real villain. Obviously Dad (Courtney B Vance) is a softy at heart. The Harvard snob only briefly offers a threat. One can scarcely imagine a more soothing way of drifting towards an unthreatening destination.

On Netflix from March 27th