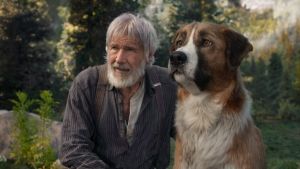 Harrison Ford in The Call of the Wild

Film Title: The Call of the Wild

Published in 1903, Jack London’s The Call of the Wild concerns a pampered St Bernard–Scotch Collie mix named Buck who is kidnapped from his California home and transported to Yukon, Canada, during the 1890s Klondike Gold Rush, when sled dogs were in high demand.

Although typically found in the children’s section of the library, it’s a text underscored by London’s own socialist beliefs: Buck is a worker who takes pride in his job pulling the sled, but who is repeatedly exploited by a series of masters, some kindly and some “. . . callous to the suffering of animals”.

Finally, he moves beyond the system of greed and gold, and beyond the “rule of fang and club”.

To date, there have been seven screen adaptations, variously featuring Clark Gable, Charlton Heston, Snoopy, and now Harrison Ford, who puts in one of his most engaging performances as Buck’s primitive-leaning master, John Thornton.

This warm, all-ages version is more faithful to the author’s brutal depictions of animal exploitation than one might anticipate from a PG-rated film. Heck, there’s even a key moment when the film echoes London’s very Marxist notion that “the Wild” is a place where capital is disavowed.

Rather cannily, the cartoonish Buck, with the assistance of motion capture master, Terry Notary, moves like a Silver Age Disney character: bounding and crashing behind big, expressive eyes. The faking of it turns out to be the making of it. And it ensures that no animals were mistreated. The stylised CG Buck allows director Chris Sanders (Lilo and Stitch) and DOP Janusz Kaminski (Schindler’s List, Saving Private Ryan) to cleverly cutaway in scenes featuring the “rule of club”.

Deaths are off-screen and merely implied. Indeed, they are sufficiently family-friendly that when one unpleasant character gets his comeuppance, the children at the screening I attended spontaneously clapped and cheered.   There are thrilling set-pieces once Buck becomes a sled dog for the exuberant Perrault (Omar Sy) and François (Cara Gee), on a remote mail-delivery route.

Happily, interactions with the cruel Mercedes (Karen Gillen) and Hal (Dan Stevens) are minimised, although Hal does decide to go after Buck and John Thornton, which is not the smartest move given that the latter is Indiana Jones.    It’s somewhat ironic that the film is released by Disney as a 20th Century Fox (now 20th Century Studios) acquisition. This is exactly the kind of big-hearted entertainment that was once Disney’s stock in trade.

The Call of the Wild opens on February 19th