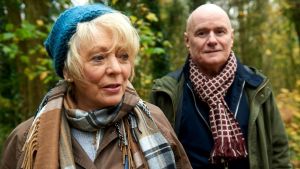 Here is a film that asks a lot of the audience’s affection for two much-loved British actors. A sort of low-key concept film, 23 Walks imagines that two older Londoners – Dave is a retired nurse, Fern a middle-class divorcee – form a friendship while walking their dogs. The relationship becomes more serious and, after challenging each other’s loyalty with awkward secrets, they stumble towards romance.

The drama doesn’t exactly play out in that number of walks, but it does meander through that many episodes. So we won’t be consulting the Trade Descriptions Act just yet.

With the best will in the world, this is thin stuff. The dialogue is written in the awkward, stilted style of a radio play – first-person pronouns dropped in a fashion that never really happens in everyday speech – and the confrontations are too often clunkily contrived.

Would anybody really spring his still quick wife on a new friend after letting her think the poor woman had died? This is an act of madness rather than selfishness. The couple have met four or five times and ended up at the same kitchen table before learning each other’s names. How did that come to pass?

If the script had not attracted Dave Johns, title character in I, Daniel Blake, and Alison Steadman, officially certified British treasure, it seems unlikely anybody would have bothered passing it before a camera. But those two actors do just about make it, ahem, sit up and beg for attention.

Johns gives us a man who has never learned the location of his own emotional release valve. Never beaten in delivering home truths, Steadman fully inhabits a body beaten thin by unworthy partners. It helps that the viewer instinctively attaches traits from earlier, fleshier roles to these underwritten characters.

Daniel Blake’s heroic decency puffs up Dave’s hollow innards. A clutch of Mike Leigh characters lend their astringency to Fern’s dull meanderings. It also helps that the dogs give first-class performances. You can probably guess who owns the German Shepherd and who owns the Yorkshire Terrier. It’s not the sort of film to spring surprises.

Available to stream from January 22nd

Breaking barriers: Supporting students with disabilities to progress to university