St Patrick’s sit back as the pack give chase 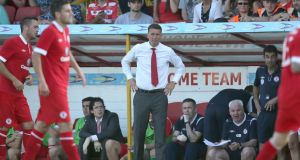 St Patrick’s Athletic get the opportunity this evening to sit back and see how the teams chasing them handle the pressure of knowing defeat will all but rule them out of the race.

Sligo face what is potentially one of their stiffest tests of the last two months with City having won four of their last five but the home side have gone nearly 10 hours of football without conceding at the Showgrounds and Ian Baraclough is optimistic his men can keep the pressure on the league leaders.

“We have to improve on our second half performance against Shelbourne to make sure we get three points from this game,” he says. “Cork will come here and have no fears.”

Dundalk head into their game knowing that a win will guarantee them at least third place and a return to European football for next season. The club will, as it happens, honour members of the 1963 title winning side who were to become the first League of Ireland side to win away in Europe at half-time. Stephen O’Donnell is still suspended and Keith Ward still injured but Kenny has an otherwise full squad to choose from as he aims to stop his side, which has lost its last two games, sliding out of contention.

Struggling with injuries
Derry, who have taken just nine points from a possible 30 know they need to win in order to retain any chance of a top three finish but Declan Devine is still struggling with injuries and so younger squad members like Ryan Curran, Ray Foy and Dean Jarvis seem likely to be involved again.

Limerick take on Bohemians at Thomond Park where Stuart Taylor’s side will be looking for their third win in six days while Shamrock Rovers could be without Barry Murphy (calf) and Conor Powell (Achilles) for the encounter with Bray Wanderers.

The FAI has paid tribute to former Ireland international Don Donovan who passed away last Thursday aged 83 years. The Cork-born defender played for Everton and Grimsby during the 1950s and early sixties and won the first of his five caps against Norway in November 1954. His son Terry was also capped twice. “The FAI offers its sincere condolences to Don’s family at this difficult time,” said FAI chief executive John Delaney yesterday. “His family should be very proud of his lifetime in football and the contribution he made for his country.”

1 Mother and two children found dead at south Dublin house
2 Cork shootings: Gardaí find lengthy apparent suicide note on one of the dead men
3 Róisín Ingle: Five ways to find joy in a pandemic. Only one of them is illegal
4 Johnson’s Brexit Bill set to be blocked by House of Lords
5 Michael McDowell: We must check if this Covid-19 lockdown is really necessary
6 Michael Harding: Three reasons you’ll never see a cat in Donegal
7 Two hundred Irish retailers for all your online Christmas shopping
8 Gordon D'Arcy: Ireland must go after victory by frightening France into mistakes
9 Medical gaslighting: The women not listened to or viewed as overdramatising or catastrophising
10 Johnny Ronan loses out on €315m Dublin docklands deal
Real news has value SUBSCRIBE