Van Gundy voices grief of half US electorate over Trump win

In many parts of the US this winter, sports will be the only common ground 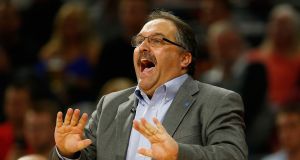 Early on Wednesday morning, Stan van Gundy, the head coach of the Detroit Pistons sat down for his pregame media briefing in Phoenix, Arizona, but he didn’t have basketball on his mind. Like many millions of Americans, he was struggling to absorb the fact that overnight, the US electorate seemed to have played upon itself an extended Hallowe’en prank that had turned cosmically and irreversibly rogue.

Van Gundy was in the same place as most of the world: trying to picture Trump as president was about as farcical and frightening as trying to imagine a cross between Lex Luthor and Homer Simpson running affairs from the Oval office.

And to the thwack-thwack of a basketball, as if Rabbit Angstrom was flitting about in the background, van Gundy delivered a five-minute-long, off-the-cuff condemnation of the moral consequences of voting for Trump.

One of the disconcerting things about that extraordinary Wednesday is that while many brilliantly composed commentaries and elegies appeared over the day from the usual heavyweight voices and influencers on mainstream media sites across the world, they seemed, for all their eloquence, dishearteningly powerless.

Perhaps that’s why something about the tone of van Gundy’s storm of bewilderment stood out: it came from a traditional US protest source: sport.

Here he is in full flow, although listening to the anguish in his voice is what makes the speech – for it was that – memorable: “Martin Luther King said, what, like, the arc of the moral universe is long but it bends towards justice . . . I would have believed in that for a long time, but not today.

“It’s bending a long way away from justice right now and what we done to minorities and women in this election is . . . it’s despicable. It’s despicable. I . . . I’m having a hard time with this. This isn’t your normal candidate. I don’t even know if I have political differences with him. I don’t know what his politics are other than building a wall and treating people of colour . . . and women are to be treated as sex objects and servants to men.

“ I don’t want to hear anything about our leaders talking to China or anybody else about human rights abuses. We just elected an open, brazen, racist, misogynist leader. We keep our mouths shut now and realise that we ought to be learning from the rest of the world, cos we ain’t got nothing to teach anybody. It is incredible! It is embarrassing. I mean, I have been ashamed of a lot of things that have happened in our country. Can’t say I’ve ever been ashamed of our country- until today.”

And that was before he really got into it. Van Gundy was born in 1959 in California, leaving him perfectly placed in time, geography and cultural backdrop to be open to the omnipotent influence of Muhammad Ali’s stance on the draft and the salute of Tommie Smith and John Carlos at the Olympic Games in Mexico 1968, two of the most vivid and enduring symbols of American protest in the second half of the last century.

As commercial interests and television and the culture of super-agents transformed big-time sport from the 1980s to the 2000s, it seemed as if sports stars had become too removed and self-occupied and wealthy to concern themselves with what has been happening in ordinary lives.

Just last week, an Arkansas senator called on the withholding of funding after six players on the University of Arkansas women’s basketball team took a knee for the anthem. These are small gestures of independent, conscientious thinking and are becoming more prevalent.

As it happened, Barack Obama hosted two high-profile guests in the White House on Thursday. One was president-elect Trump, looking overwhelmed and somewhat terrified as he began to absorb that this bleak joke is also on him: that he is now compelled to do this thing – be president – for four full years, even when the cameras aren’t on him and nobody is looking.

The other was LeBron James, there as the figurehead of the Cleveland Cavaliers, the 2015 NBA champions. James had appeared with Clinton when she campaigned in Cleveland and after the election sent out a general message about letting children know they can still change the world for the better. It must have been the trippiest day of Obama’s eight years in office.

Van Gundy is hardly a celebrity in American sport. On the surface, he is just a career basketball coach. But he has always had an outspoken streak – he is wonderful, for example, on the tyranny of kids’ sports coaches who coach teams purely to win (for the ego of the coach) rather than to develop his/her charges as ball players and people.

Meanwhile, the ball games – the great American distraction and extraordinary generator of dollars – will go on this weekend. Hot dogs will be sold. Beer will be drunk. Basketball, football, ice-hockey will fill stadiums and air-space and imaginations. Maybe that’s as well. Team affiliations have always been impervious to political perspectives. The fans on both sides of the electoral divide will turn to their teams this weekend. Those that can afford the skyrocketing tickets will go along.

As Dr Cornel West, speaking of the deterioration in life-quality and circumstance afflicting Democrats and Republicans alike, people of all colours and creeds, told BBC Newsnight presenter James O’Brien on Thursday evening: “Most Americans are desperate, my brother.”

The Pistons went down 100-107 on Wednesday night and reportedly looked weary. A long season is expected, in every sense. In many parts of the USA this winter, sports will be the safest topic of conversation; the only certain common ground across the vast Republic.