TV View: No easy group as dark night of the Euro draw had fighting fatigue

Over in Vegas, the speed, the precision, the brutality – Rogan let Aldo have it 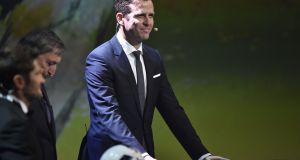 Oliver Bierhoff, one of the ball-pullers, was clearly and hilariously bored of the whole affair long before the end. Photograph: Loic Venance/AFP/Getty Images

The build-up was long – so long that keeping awake was a real achievement. On this couch it was a matter of pulling out all the stops. Coffee. Open window. Loud music. Slaps to the face. More coffee. A brisk walk outside to take the air. Once or twice we were sorely tempted to give it up and set the DVR and go to bed. But we resisted. We hung in there.

Because this was huge. This was the main event. This was, of course, the draw for Euro 2016.

Live from Paris, technocrats in technicolour. Carried out by Gianni Infantino, the King Ralph of football officialdom. “President Michel Platini would be here doing it, except he’s not allowed to,” chirruped George Hamilton. Poor Michel, banned from his own shindig and damn the bit of sympathy for him.

Over on the BBC, however, Mark Lawrenson was keen to give the late Monsieur Platini his due. Only for him, reasoned Lawro, none of us would be here. Or something like that.

But the point was well made. Alongside him was Jamie Ward of Nottingham Forest and Northern Ireland. When the BBC’s Jason Mohammad asked just how the North had made it this far, Ward reeled off a list of reasons, including: “We enjoy the social side of things.”

Mohammad: “What do you mean, the social side of things?”

Lawro (straight in): “It’s black with a little white top on it, Jason. Plenty of that.”

The draw was, as ever, an advertisement for just doing these things in a back room somewhere and telling us all about it afterwards. Oliver Bierhoff, one of the ball-pullers, was clearly and hilariously bored of the whole affair long before the end.

“It’s unlikely we were going to get an easy group,” said Brian Kerr, not unreasonably. “The great thing is that we have no star players,” said Lawro, not apparently logically, “and this is probably the least talented squad we’ve ever qualified with. Italy and Belgium will be looking at that and going, ‘Happy Days!’”

Speaking of no star players: Saturday night. Thomond Park. Munster v Leicester. Grim, grim viewing. Donncha O’Callaghan was BT Sports’ guest analyst and he laid it out from the start. “It’s either going to be a massive success for Munster or it’s going to be a huge scar on their careers.”

Door No 2, as it turned out. Even though Munster had plenty of the ball, Leicester thumped them. Even the sight of referee Romain Poite being poleaxed by Leicester prop Dan Cole in the lead-up to Mike Sherry’s try couldn’t raise more than a half-hearted smile.

“Europe is everything around here,” Donners intoned after. “We’ll see who the real men are next Sunday.” Well, he didn’t look overly confident that the real men would be seen wearing red. Whatever way we spin it, these look like bleak times for Irish rugby.

The same can’t be said for Conor McGregor, whose times are pretty far from bleak after that Saturday night/Sunday morning one-punch knock-out of José Aldo.

We did not stay up to watch him live and when we found out that the whole fight could be viewed on a Vine in bed on Sunday morning, we were damn happy we didn’t.

“José Aldo tends to slow down in later rounds,” was commentator Joe Rogan’s pre-fight take. “He establishes a position of dominance. He establishes a lead and then coasts.”

So McGregor did the needful in just 13 seconds. Even having seen it on the phone before settling in on the couch, it was genuinely thrilling to watch on TV. The speed, the precision, the brutality – and that was just Rogan’s post-fight interview with Aldo.

Rogan: “How much, if any, of the fight can you remember?”

Aldo: “I think we need a rematch, because that was not really a fight. We need to get back in there.”

Rogan: “Oh, it was certainly a fight. Just one that began and ended very quickly.”